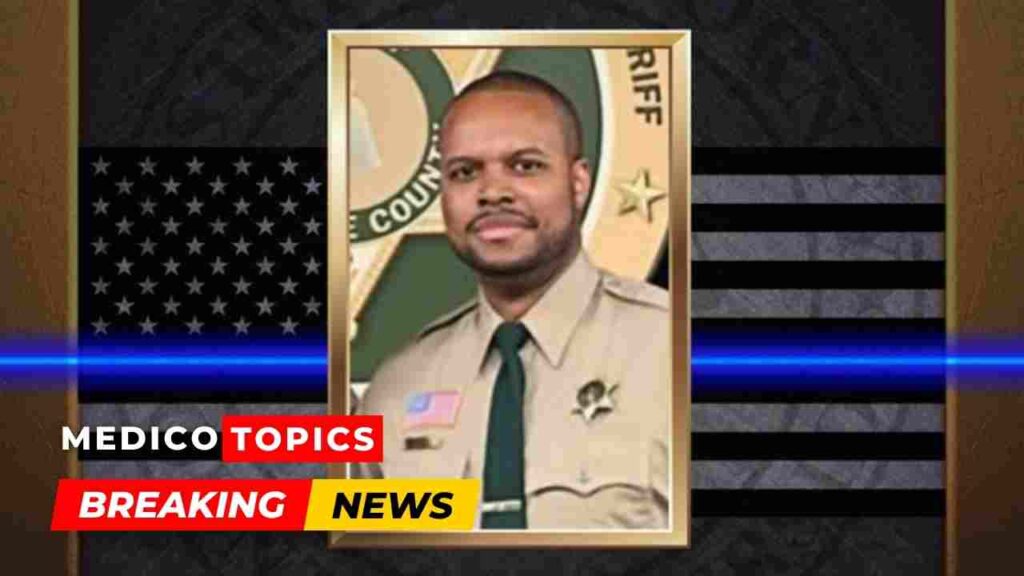 Riverside county Deputy Darnell Calhoun was shot and killed in Lake Elsinore. Let’s see more about the Lake Elsinore shooting and who is the suspect in detail.

What happened to Deputy Darnell Calhoun?

Riverside County Deputy Dies After Being Shot During Confrontation near Lake Elsinore on Friday.

At the time of the shooting, deputy Darnell Calhoun, who had recently transferred to the Riverside County Sheriff’s Department, was attending to a call close to Lake Elsinore.

Sheriff Chad Bianco reported that a deputy with the Riverside County Sheriff’s Department (RSO) passed away after being shot while engaging a suspect at a property close to Lake Elsinore on Friday afternoon.

RSO identified the deceased deputy as Deputy Darnell Calhoun. His demise was confirmed by the Riverside Country police via the tweet, saying,

We are devastated to announce the passing of Deputy Darnell Calhoun who was killed in the line of duty this afternoon.

Calhoun, 30, started his career in law enforcement with the San Diego police department. He worked there for two years before moving to Riverside County less than a year ago.

Calhoun was assigned to the station in Lake Elsinore. “He was the most cheerful, the most positive, the most good, wholesome man you could imagine,” Bianco said.

Darnell’s wife and unborn child are left behind him. Darnell is a native of Murrieta and the son of Calhoun’s BBQ (renowned in our community) proprietors.

According to the RSO, the incident took place at approximately 4:30 p.m. on Friday in the unincorporated neighborhood of Lakeland Village, which borders Lake Elsinore, in the 18500 block of Hilldale Lane, just east of Grand Avenue.

Calhoun arrived on the scene first. What happened next is unclear, but when a second officer came and discovered Calhoun bleeding out in the street.

The second deputy and the suspect then engaged in gunfire, resulting in the suspect being shot.

Calhoun was immediately taken to the local Inland Valley Medical Center in Wildomar for treatment. Unfortunately, just before 8 p.m. on Friday, the department announced that he had passed away.

According to the police, a Press conference with Sheriff Bianco will be held at 9:00 pm – 36320 Inland Valley, Wildomar.

The identity of the suspect is still unknown. Officials stated that a second officer who arrived on the scene shortly after Calhoun was shot badly wounded the shooting suspect. That suspect was also taken to the same hospital.

The Riverside Police Department has arrested the suspect. A tweet from the police department stating that the suspect was “in custody” confirmed the information.

The Riverside Police department has not yet provided any information about the suspect and his condition.

A deputy has been shot in #lakeelsinore. Suspect is in custody. Deputy is being transported to local hospital. More details to follow. https://t.co/OyFV5nnYVm

From the press conference: Deputy Darnell Calhoun responded to domestic violence (child custody dispute), and call when he was murdered.

His backup Deputy arrived & found Deputy Calhoun down in the street. Gunfire was exchanged, and the suspect was critically wounded.

From the press conference: Deputy Darnell Calhoun responded to a domestic violence (child custody dispute), call when he was murdered.

His backup Deputy arrived & found Deputy Calhoun down in the street. Gun fire was exchanged, the suspect was critically wounded. pic.twitter.com/FU0KkER1eD

To our brothers and sisters of the Riverside County Sheriff’s Dept., no words can express our deepest sorrow for the loss of Deputy Darnell Calhoun. Our thoughts and prayers are for you, his family, and his friends. We will honor him, mourn him, and stand beside you in every way.

We are heartbroken a second deputy has been killed from @RSO
in the last two weeks. Our support and prayers go out to Deputy Darnell Calhoun’s family and the Riverside County SO during this extremely tragic time. EOW: 1/13/2023

SBPD is saddened by the loss of Deputy Darnell Calhoun, who paid the ultimate sacrifice this afternoon while protecting the residents of Riverside County. We offer our sincerest condolences to the family, friends, and colleagues @RSO

Tonight, we mourn the loss of Deputy Darnell Calhoun. We thank the Lake Elsinore Sheriff’s Station for their hard work and dedication to our community.

Our office joins with the friends, family, and fellow officers in mourning the loss of @RSO
Deputy Darnell Calhoun, who was tragically murdered this evening in Lake Elsinore.

How did Elias O. Baquerovd die? Veteran Broadcast Journalist Cause of Death Explained