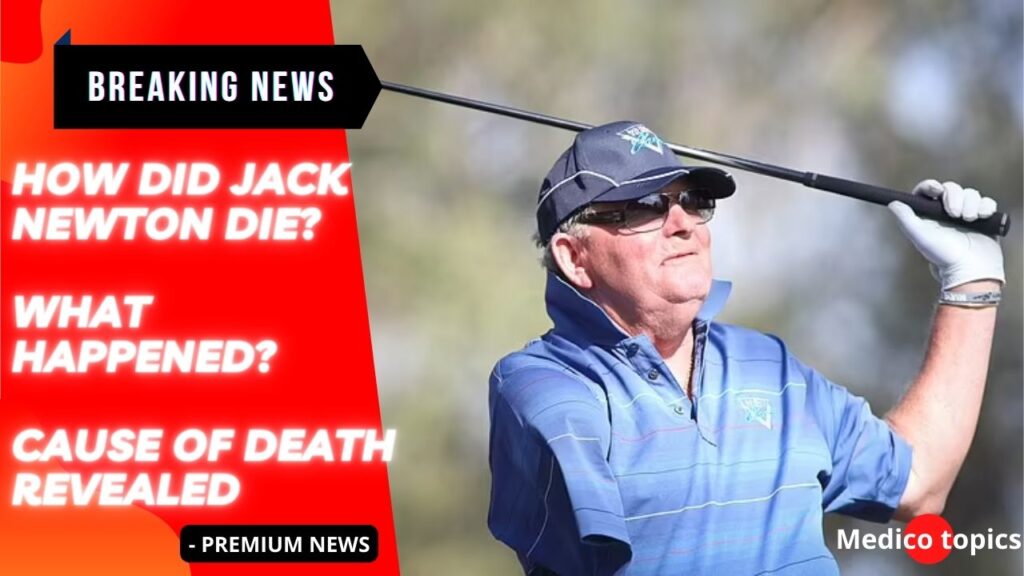 Jack Newton, a champion Australian golfer, died at the age of 72 due to health complications. The former Australian Open champion, who came close to winning the British Open and US Masters, survived a horrific accident in 1983 when he walked into an airplane propeller at Sydney Airport and lost his arm and eye. Let’s see how did Jack Newton die.

Who was Jack Newton?

Newton’s win at the Australian Open was one of three on the Australian tour; he also won once on the PGA Tour and three times on the European Tour. Newton, who turned professional in 1971 and won the Dutch Open the following year, had a stellar career that included runner-up finishes at the British Open in 1975 and the US Masters in 1980.

“I always felt that if I came into a major in good shape, I could be dangerous,” Newton said of his career. “That’s how I used to play golf.” I wasn’t afraid of anyone once I got my tail up.”

Newton’s playoff loss to Tom Watson at Carnoustie in 1975 was particularly unlucky. He had set a course record of 65 in the third round, despite having injured his ankle so badly on the practice tee before the start of the championship that pain-killing injections were needed just to get on the course.

In the final round, Newton led through the back nine but bogeyed three of the last four holes. Meanwhile, a wire fence kept Watson’s ball in play on the eighth hole, and in the play-off the next day, the American miraculously chipped for eagle at the 14th to win the Claret Jug by one shot over Newton.

Newton’s golfing career was cut short in July 1983 when, at the age of 33, he walked into a plane’s spinning propeller during a rainstorm and lost his right arm and eye. Newton’s right arm was severed, he lost sight in his right eye, and he suffered severe abdominal injuries.

Doctors gave him a 50/50 chance of survival, and he spent several days in a coma and approximately 2 months in intensive care, as well as extensive rehabilitation from his injuries. “Things weren’t going so well for me. “I noticed the priest walking around my (hospital) bed,” Newton later explained.

Despite his near-death experience, Newton returned to public life as a famous television commentator, radio and newspaper pundit, golf course designer, and chairman of the Jack Newton Junior Golf Foundation, which raised hundreds of thousands of dollars for Australia’s aspiring golfers.

Newton also re-taught himself to play golf one-handed, swinging the club with his left hand from a right-handed stance, to reduce his handicap to around 12 or 14.

In 2007, Newton was awarded the Order of Australia for his services to golf.

Jack Newton Cause of death

Newton’s family revealed in a statement released Friday morning that he died overnight at the age of 72.

How did Jack Newton die: Newton, the 1979 Australian Open champion, died overnight as a result of “health complications,” according to his family.

“[He] was a fearless competitor and iconic Australian, blazing a formidable trail between 1971 and 1983,” his family said on Friday. “He fought back against tremendous adversity in the only way he knew how.”

“[He] chose to invest his time, energy, and effort selflessly in giving back to the community through his Jack Newton Junior Golf Foundation, sports commentary, golf course design, and raising significant funds for several charities, most notably [for] diabetes.”

“His love of golf and his desire to help future generations of golfers and the Australian community exemplifies the character of our father, beloved husband, proud brother, adoring grandfather, and outspoken mate.”

“In true Jack Newton fashion, we will celebrate his incredible life; however, for the time being, our family requests privacy, and we thank everyone for their love, support, and friendship throughout his life.”

I hope we have resolved all doubts about how did Jack Newton die!

We are deeply saddened by the passing of Jack Newton OAM. Our thoughts and prayers are with former Storm premiership player Clint and the whole Newton family at this difficult time. Rest in peace Jack

Thinking of the Newton family this morning following the very sad passing of Jack Newton. The sport of golf owes Jack a lot for what he did for the game over many years. A remarkable man who will be missed by many. Rest In Peace Jack.

RIP Jack Newton. His junior golf foundation was a pillar that tied many to the game of golf for life. And on TV, you’d learn horrible shots into the scrub meant a visit to where elephants go to die. Great character, great man.

Sad to hear the news of Jack Newton, a lot of great memories off the course at dinners. Rip.