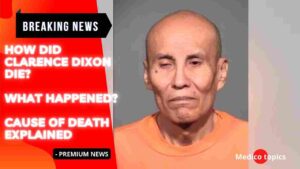 Clarence Wayne Dixon was a convicted murderer in the United States who was killed in Arizona. On May 11, 2022, he was put to death with lethal injection. At the age of 66, he passed away. Let us see how did Clarence die, and what was his cause of death.

How did Clarence Dixon die?

Clarence Dixon, 66, was executed by lethal injection at the state prison in Florence for the murder of Deana Bowdoin, a 21-year-old Arizona State University student. He was the sixth person executed in the United States in 2022. Frank Strada, a deputy director with the Arizona Department of Corrections, Rehabilitation, and Reentry, announced Dixon’s death late Wednesday morning.

Although the medical team had some trouble locating a vein to inject the fatal chemicals, the execution appeared to follow the state’s protocol. Dixon’s arms were initially tested, and then a groin incision was done. It took roughly 25 minutes to complete this process.

Clarence Dixon Cause of Death

Dixon’s mouth remained open and his body did not move after the medicines were delivered. About 10 minutes after he was injected, the execution was ruled complete.

Dixon’s lawyers attempted to postpone his execution in the final weeks of his life, but judges rejected their contention that he was not mentally fit to be executed and had a rational comprehension of why the state wished to execute him. Less than an hour before Dixon’s death, the United States Supreme Court denied a last-minute stay of execution.

Dixon had already denied the option of being executed in Arizona’s renovated gas chamber, which hasn’t been used in the United States in more than two decades.

“The Arizona Supreme Court should respect the laws,” Dixon stated shortly before being killed with pentobarbital, according to Strada. They turned down my appeals and petitions to overturn the judgment in this case. I constantly claim innocence and will continue to do so. Let’s get this (expletive) started.”

“This is pretty comical — trying to be as thorough as possible as you are attempting to kill me,” Dixon said as prison medical professionals placed an IV line in his leg in preparation for the injection.

After the death, Leslie James, Bowdoin’s older sister and a witness to the execution told reporters that Deana Bowdoin was about to graduate from ASU and was pursuing a career in international marketing. James characterized her sister as a dedicated worker who enjoyed traveling, speaking several languages, and writing poetry.

She praised the execution but expressed disappointment with how long it took: “This procedure was just too long,” James stated. Since his conviction in 2008, he had been on death row.

The last time an Arizona prisoner was executed was in July 2014, when Joseph Wood was administered 15 doses of a two-drug combination over two hours in a botched execution, according to his lawyers. Wood snorted and groaned over 600 times before dying, and an execution that should have taken 10 minutes took over two hours. The procedure took so long that the Arizona Supreme Court held an emergency hearing during the execution to consider whether to stop it.

In recent years, states such as Arizona have struggled to get execution medications because pharmaceutical companies in the United States and Europe began prohibiting their products from being used in fatal injections.

Bowdoin, who was found dead in her residence in the Phoenix suburb of Tempe, had been raped, stabbed, and strangled with a belt, according to authorities.

Dixon, who lived across the street from Bowdoin, was charged with rape, but the charge was eventually withdrawn due to the statute of limitations. He was found guilty of murder in her death.

Dixon’s lawyers argued that he was mentally ill because he believed he would be executed since police at Northern Arizona University in Flagstaff mistakenly arrested him in another case involving a 21-year-old student in 1985. His lawyers admitted that Flagstaff cops had legitimately apprehended him.

Is Trevor Strnad committed suicide? Cause of Death Revealed

[…] How did Clarence Dixon die? What happened? Cause of Death Explained […]