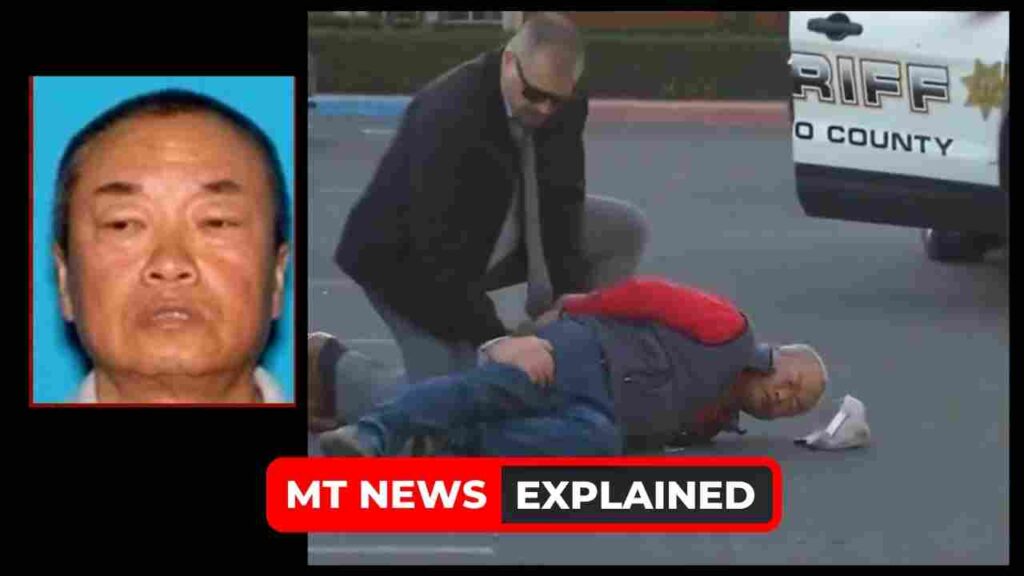 ANOTHER MASS SHOOTING:  In Half Moon Bay, a small town south of San Francisco, 7 people were shot and killed. After two distinct attacks on farms in the Northern California coastal community, the San Mateo County Sheriff’s Office has detained a suspect. Let’s see Who is Chunli Zhao the dangerous suspect and the Half Moon bay shooting in detail.

The San Mateo County Sheriff’s Office said that seven of the eight people who were shot and murdered on Monday afternoon in several shootings in and around Half Moon Bay, California.

Four people were found shot dead and one badly wounded in an incident at Concord Farms. At the moment, that person is receiving care at Stanford Medical Center. Three more people lost their lives as a result of the second shooting, which happened at Mountain Mushroom Farm. A short drive separates the two establishments in the coastal city’s unincorporated section.

A suspect was apprehended by the San Mateo County Sheriff’s Office when they found him in a car close to their Half Moon Bay substation. Inside the car, they also discovered a semiautomatic handgun.

Officers were seen bringing a man to the ground and then apprehending him in a video from ABC7 News Bay Area. The man was wearing a white hat and jacket. At 4:52 p.m. PT, the department tweeted, “At this time, there is no ongoing threat to the community.”

Suspect: Who is Chunli Zhao? 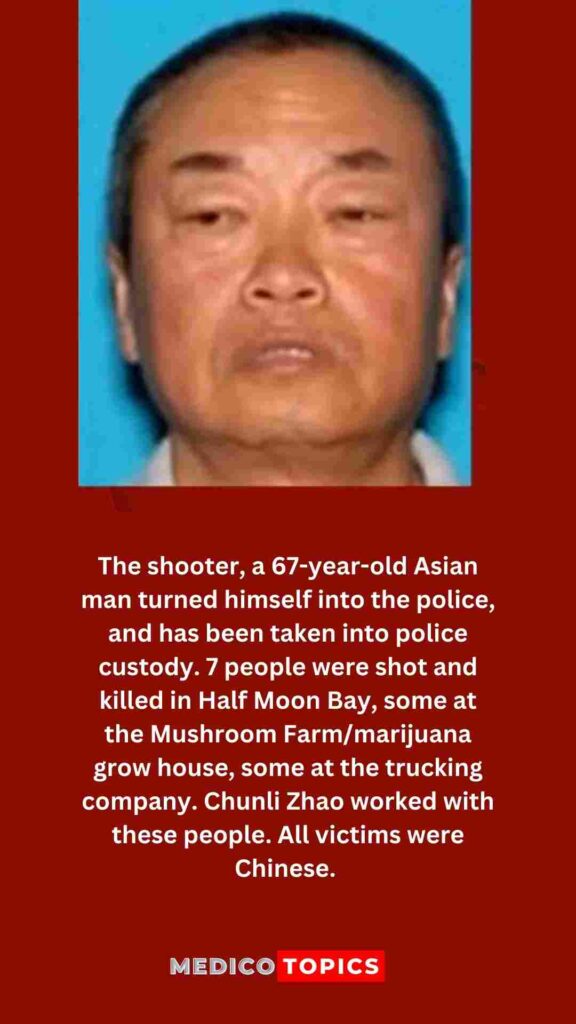 Chunli Zhao, a 67-year-old local man who might have worked on one or both of the targeted farms, was later identified as the suspect. Debbie Ruddock, a member of the Half Moon Bay City Council, said that the victims were Chinese farm workers.

Less than 48 hours prior, on the night of celebration before the Lunar New Year, a shooter opened fire on 20 people, killing 11, in Monterey Park, a California city located just east of Los Angeles. Asian Americans predominate in that community.

The suspect was identified as a disgruntled worker who worked at one of the farms, however, it was unclear how the two businesses might be related at the time. Authorities reported that the victims were all thought to be employees.

The sheriff’s office said that a media staging will be set up at a substation at 537 Kelly Ave. during the police reaction to the shooting. A man in handcuffs was spotted leaving the substation at about 4:40 p.m. He was wearing a white baseball cap.

The shooting suspect drove himself to the substation situated between the two companies, where he turned himself in to deputies, according to the sheriff’s office.

Gavin Newsom issued the following post on social media in the wake of the latest shootings: “At the hospital meeting with victims of a mass shooting when I was pulled aside to be briefed of another shooting.

*Update* Suspect is in custody. There is no ongoing threat to the community at this time.

He was identified as Zhao Chunli, a 67-year-old local of Half Moon Bay. The sheriff’s office reported that Chunli’s car had the gun used in the shootings.

Authorities later acknowledged that they thought the semiautomatic rifle was the only weapon used in the massacre, however, they were unable to identify how it was obtained. At the IDES Hall, located at 735 Main St. in Half Moon Bay, a family reunion facility has been established.

At a press conference on Monday night, San Mateo County Sheriff Christina Corpus remarked, “This kind of shooting is awful.” We hear about this tragedy far too frequently, but today it particularly affected San Mateo County.

There is no known reason for the fatal gunshot. Only two days prior, a mass shooting in Monterey Park following a Lunar New Year Festival on Saturday night resulted in the deaths of 10 persons and the injuries of an additional 10.

Watch the moment when the suspect caught

This is the moment 67-year-old Chunli Zhao was taken down after police say he killed 7 people and injured two at farms in Half Moon Bay. Zhao was arrested after being found in his vehicle in the parking lot of the Sheriff’s Office Half Moon Bay police substation.

He was taken into custody without incident and a weapon was located in his vehicle, the sheriff said. Zhao is believed to have acted alone. My photographer colleague Edgar captured this moment today.

He realized what was happening, and dropped to his knees to keep rolling from the ground. After the shooting in Monterey Park yesterday which killed 11… it’s hard to grapple with the reality of our world. This hits far too close to home. – DION LIM

How do State Leaders React to Half Moon Bay Mass Shooting?

United States government official.@POTUS has been briefed by the Homeland Security Advisor on the mass shooting in San Mateo County, California. He has asked federal law enforcement to provide any necessary assistance to the local authorities. As more details become available, the President will be updated.

I’m so heartbroken. We cannot even grieve lives lost without having to pivot to the next tragedy. This is a horrific reality. We need to change as a country. Sending so much love to Half Moon Bay.

At the hospital meeting with victims of a mass shooting when I get pulled away to be briefed about another shooting. This time in Half Moon Bay. Tragedy upon tragedy.

Heartbroken by the gun violence in Monterey Park and Half Moon Bay. How many more must die? SMC Board of Supervisors taking action by pledging $2 million over 2 yrs for the SMC Gun Violence Prevention Program to remove guns from felons, stalkers, and other prohibited individuals.

I continue to monitor the unfolding tragedy that has taken place in Half Moon Bay. My gratitude to the San Mateo Sheriff’s Office @SMCSheriff who took the suspect into custody and are working the two scenes of the murders.

A mass shooting has now hit my beloved community of Half Moon Bay, one of the last places one would expect such an abominable act. We celebrate pumpkin festivals and holiday parades there. When will Congress have the guts to DO something about gun violence?

This is a developing story. Details may change as more information becomes available. Stay tuned for updates.

How did Polo Polo die? Mexican comedian cause of death explained

How did Dr. George Clyde Debnam die? Raleigh doctor who delivered 10,000 babies cause of death explained