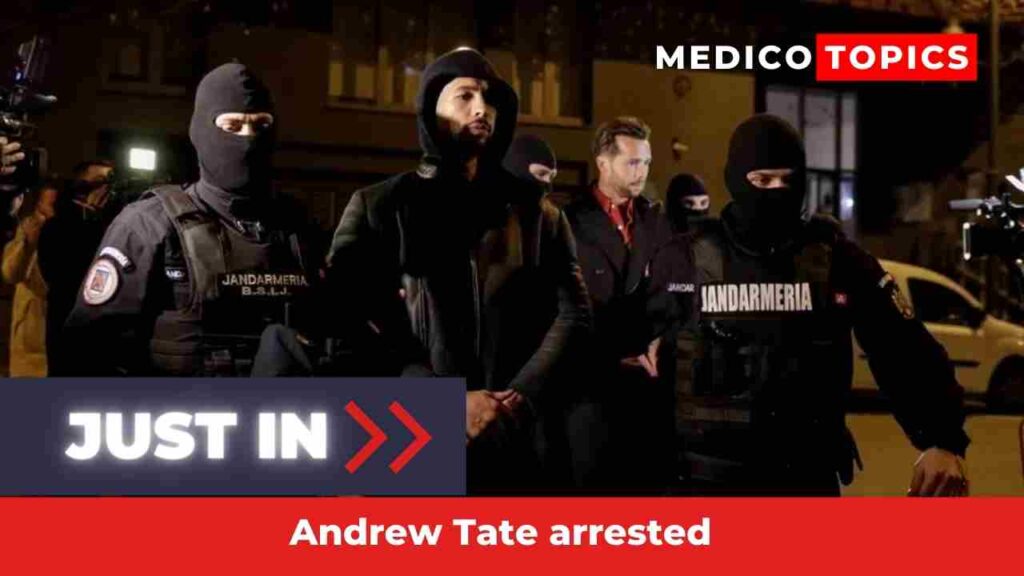 Romanian police detained Andrew Tate, the hustle bro and MGTOW influencer. Let’s see what happened and why was Andrew Tate arrested in detail.

Why did the police arrest, Andrew Tate?

British-American Tate and his brother Tristan were taken into custody in Bucharest on suspicion of human trafficking. According to reports, controversial online influencer Andrew Tate was held in Romania as part of an investigation into the rape and people trafficking.

He was reportedly being looked into for human trafficking in relation to the disappearance of two women months ago.

Police allegedly conducted a raid at Andrew Tate’s luxury Romanian home in Bucharest today. The raid on his home was allegedly set forward after he posted a video of himself responded to Greta Thunberg’s roast of him on Twitter yesterday.

Andrew Tate arrested at his home in Romania following a raid by police. pic.twitter.com/lfHpvTzZrP

According to Romanian media sources, “the home has been searched by the Directorate for Investigating Organized Crime and Terrorism. He apparently posted a video replying to Greta Thunberg’s recent Twitter roast of him, which prompted the raid on his residence.”

According to Reuters, the brothers’ lawyer confirmed their detention. Before they could raid his residence, Romanian police needed evidence that Tate was in the nation.

In the video he sent to Twitter, which has him smoking a cigar and donning a robe, Tate is seen accepting two boxes of pizza from a nearby Romanian company called Jerry’s Pizza.

The world was curious.

And I do agree you should get a life ❤️ https://t.co/mHmiKHjDGH pic.twitter.com/SMisajQRcf

The US Embassy received a complaint that a woman of American citizenship was being held without consent at their residence and it led to Tate’s arrest.

“Yes, please do enlighten me,” after boasting about the carbon emissions of his super cars. She tweeted, email me at smalld**kenergy@getalife.com”

yes, please do enlighten me. email me at smalldickenergy@getalife.com https://t.co/V8geeVvEvg

Tate acquired prominence online for a series of statements regarding women, including saying that they “bear some responsibility” for being assaulted. Tate has a sizable following of youngsters on Twitter, Instagram, and TikTok.

Several advocacy organizations have criticized Mr. Tate for his opinions and cautioned he was a danger to youngsters who follow him on social media.

Greta Thunberg demolishing misogynist Andrew Tate via a Tweet the day before he is arrested, is the best New Year’s gift ever.

Domestic violence organizations have referred to his writing as “extreme misogyny.”

The Greta Thunberg response to Andrew Tate is the most bot-liked tweet I’ve ever seen in my life. No one likes that little depopulation twerp, so she is buying likes!

Tate identified himself as “absolutely a misogynist” in one YouTube video.

He said, “I will state right now that I am absolutely sexist, I am absolutely a misogynist and I have f*** your money so I’ll say what I want. There is no way you can be rooted in reality and not be sexist.”

Who is Andrew Tate?

Before becoming well-known throughout the world, Tate, a British citizen who was born in the US – was a kickboxer and won world titles. Five years ago, Mr. Tate relocated to Romania.

The former kickboxer gained notoriety in 2016 after being removed from the British television program Big Brother because of a video that allegedly showed him assaulting a woman.

As a result of his comments that women should “bear responsibility” for being sexually assaulted, he later gained prominence online and was banned from Twitter. He was later given a second chance.

So…Elon Musk let Andrew Tate back on Twitter, and Tate promptly used it to reveal his whereabouts to authorities in Romania who then arrested him.

All because Greta Thunberg owned him so hard his little wee-wee fell off.

“The four suspects appear to have created an organized crime group to recruit, housing and exploit women by forcing them to create pornographic content meant to be seen on specialized websites for a cost,”

The brothers and two Romanian citizens have been under investigation since April. A video that has gone viral on social media purports to show Mr. Tate and his brother being led away from a posh villa.

Two British and two Romanian citizens were suspected of belonging to a criminal organization that specialized in human trafficking, according to a statement from Romania’s Directorate for Investigating Organized Crime and Terrorism (DIICOT), which did not mention the Tate brothers by name.

It also published a video of the raid, which showed guns, knives, and money on display in one area.

The social media sites Facebook, Instagram, YouTube, and TikTok have all banned Tate, with TikTok stating that “misogyny is a hateful ideology that is not tolerated“.

Whether Andrew Tate is guilty or not, they skipped the entire Jeffrey Epstein client list because he’s their enemy and the people on that list aren’t.

I’m not going to comment on the arrest situation because nobody actually knows what’s going on yet.

It’s innocent until proven guilty. Not the other way around. Wait and see is always the wise move. pic.twitter.com/NiTP57mVJA

The Romanian pizza chain appearing in Andrew Tate’s response video to Greta Thunberg was reportedly used as proof for Romanian authorities to confirm his presence in the country, leading to the arrest of him and his brother in a human trafficking probe pic.twitter.com/MD0cved7q5