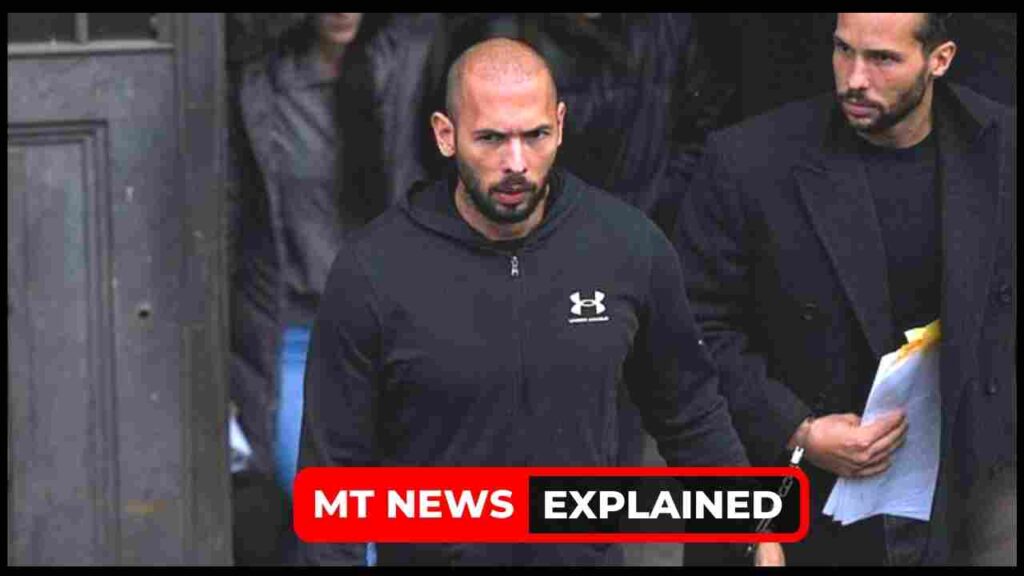 Breaking News: An extension of police detention by a Romanian court means that Andrew Tate will stay in custody. According to BBC News, the Romanian court decided to prolong Andrew Tate and his brother Tristan’s arrest, thus they will remain in custody until February 27.

Influencer Andrew Tate and his brother Tristan will remain in arrest through February 27 after having their police detention extended by a Romanian court.

The two are being investigated for alleged sexual assault and exploitation, and a court has ordered that they be held in jail for an additional 30 days as police gather evidence.

A documented justification for this extension will be provided later. Both Tate and his brother reject the accusations leveled against them.

Why was Andrew Tate arrested in Romania?

According to numerous reports, internet celebrity and former professional kickboxer Andrew Tate and his brother have been imprisoned in Romania on several allegations, including human trafficking.

Tate, his brother Tristan, and two other suspects would be detained for a full day, according to Romanian authorities. Since April, there has been an investigation into the two brothers.

According to reports, Tate was detained on charges of rape, human trafficking, and organizing a gang of criminals. As per the Press release, prosecutors claimed to have located six women who had been sexually abused by the suspects.

Andrew Tate, a controversial former kickboxer and social media personality, was detained for allegedly kidnapping two girls in Romania. Following a raid on Thursday, a handcuffed Tate, 36, who gained notoriety this year for his sexist and misogynistic beliefs, was seen being carried out his opulent villa by police. Along with two other suspects, his younger brother Tristan, 34, was also detained, and the four were all kept for a full day in Bucharest.

The British man, who was raised in Luton but was born in Washington, DC, is being investigated by the Directorate for Investigating Organized Crime and Terrorism (DIICOT). According to reports in Romania, he and his brother are being interrogated on suspicion of being part of an organized crime group that used women in adult videos.

An investigation into human trafficking led to the arrest of Andrew Tate for “abducting two girls.”

When authorities allegedly discovered two girls who claimed they were being detained against their will, the siblings were also reportedly questioned in April. The brothers were freed while the inquiry was ongoing, but on Thursday they were arrested once more in connection with a probe into rape, human trafficking, and the formation of an organized crime ring.

The Tate brothers and two other unnamed individuals, according to Romanian authorities “have established an organized crime organization to enlist, housing, and utilize women by compelling them to produce pornographic content. They would have made huge financial gains.”

“We cannot at this time provide any details regarding the claimed accusations that they have been detained,” a Tate representative told the Daily Mirror. “However, Andrew and Tristan Tate have the utmost respect for the Romanian authorities and will always support and help in any way they can.”

One day after clashing with climate activist Greta Thunberg on Twitter and boasting about his collection of 33 automobiles, Tate was arrested.

Tate posted on the platform, “This is just the beginning. Please give me your email address so I will send you a detailed list of all the vehicles in my collection and their massive emissions. Yes, kindly enlighten me, the activist from Sweden, age 19, said in response. Smalldickenergy@getalife.com is my email address.

The nation’s organized crime and terrorism team will examine self-described misogynist Andrew Tate and his brother as part of the investigation into alleged sex crimes and human trafficking charges.

The timing of the raids is thought to have been influenced by his online altercation with Greta Thunberg; a day earlier, he had mocked the climate activist while posing next to a Romanian pizza box, perhaps giving away his whereabouts to law enforcement.

Teens from Romania describe how Tate contacted them on social media

When Daria Gusa, then 16 and still in school, claims to have received a private message on Instagram from prominent influencer Andrew Tate, who is nearly 20 years her senior,

Daria said, “He placed some flirting emoji and it just stated ‘Romanian girl’.” I was perplexed because the account was private and I had only 200 followers.

Who is Daria Gusa?

She is one of two adolescents who told the BBC how Andrew Tate and his brother Tristan found them online and presumably used a predetermined formula to contact them.

We were high school girls, Daria remarked. “We included information about our high school in our bio. In my perspective, he was simply looking for ladies who were as innocent or naive as possible.”

She displayed a screenshot of the unreplied-to communication for us. However, she claims that several of her pals did. Being the daughter of a well-known Romanian politician, Daria, who is currently enrolled in university in the UK, feels empowered to speak out in public while others have declined to be interviewed.

The Tate brothers are being detained in Romania for 30 days as police look into rape and trafficking claims, which both men deny. Andrew Tate appears to advise on how to approach women on social media in a video that was shared online. 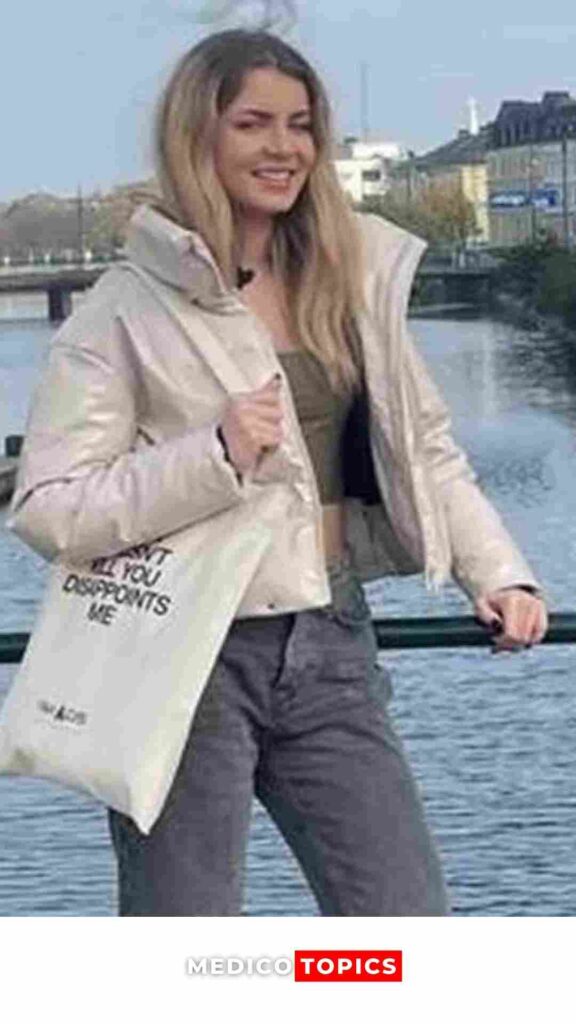 Tristan Tate’s brother contacted Gabriela (not her real name) on social networking when she was 17 years old, however, she later claimed to be 19 years old.

To hide her identity, she requested that we refer to her as Gabriela. She showed me his first text, which said, “You’re gorgeous.” She said, “I knew he was doing the same thing with other girls. He always begins a discussion by saying, “You’re beautiful,” exactly once.

Gabriela claimed that Tristan Tate sent the same opening message to a friend of hers. The remark “you are gorgeous” isn’t awful as an opener, according to Andrew Tate in his YouTube video, who then goes on to describe what he calls “a wonderful example” of a conversation.

Mr. Tate recommends males ask the woman: “Why do I never see you? after finding out where she is. What have you been hiding?” In the recording, he states that “99% of them say [they] are not hiding.” Exactly this seems to have occurred during the conversation with Gabriela.

Screenshots of what is allegedly Tristan Tate’s interaction with her reveal his subsequent message to be exactly as Andrew describes it: “I feel like I’ve seen you around town before. That seems possible. What have you been doing there?”

It’s possible, Gabriela responds. “I didn’t run away. Gabriela claims he invited her to a party and a drive-around in his car, but she turned them down. Screenshots of their chat show that it quickly came to an end after she shared a video about him online.

“If influential people see you acting in this way, they won’t ever want to write you, merely a polite reminder, “He said in one of his last messages.

Controversial streamer Adin Ross intends to visit Andrew Tate in prison in Romania after learning that his name was added to Tate’s visitation list.

Even while he is in detention, Andrew Tate’s social media accounts have continued to post updates. He stated on Thursday that five people had been given permission to visit him while he was being held, including Adin Ross, a 22-year-old American influencer with millions of followers who claimed to be traveling to Romania on Thursday.

The Tate brothers have not yet been charged with anything.  In a little more than a week, their 30-day jail stint will come to an end. The accusations against them remain untested despite all of the confessional recordings and commentary on their personal lives; any supporting documentation is currently hidden from the public’s eyes.

READ ALSO, Andrew Tate is a victim of swatting

Who were Andrew and Tristan, Tate?

On Thursday, authorities detain Andrew and Tristan, Tate. They will be detained for 24 hours to be questioned as part of an inquiry into human trafficking.

Requests for a response on Thursday evening were not immediately answered by the FBI or the US State Department. Emory Andrew Tate III, a native of Chicago, has been dubbed “the king of toxic masculinity” for the anti-women internet rants that have made him famous and won him millions of followers.

Former professional kickboxer Tate initially gained attention when he made an appearance on Big Brother in 2016. However, he was fired from the show after a video surfaced online that purported to show him punching a woman with a belt; a film he insisted was altered.

On April 11 of this year, a human trafficking inquiry also resulted in a raid on Tate’s residence in the country of Eastern Europe. The Tate brothers were arrested for several hours for questioning during the April raid, which was sparked by a complaint from a US resident to the American Embassy in Bucharest, but they were eventually freed while the investigation progressed.

In the past, Andrew Tate has bragged to his supporters that “40%” of the reason he moved to Romania was that the police there were less inclined to investigate any claims of sexual assault against him.

Tristan and Andrew Tate each hold dual citizenship with the US and the UK. The brothers, who had a British mother and an American father, split their childhood between the two nations. The two British suspects, according to the police, pretended to love and want to marry their female victims to entice them.

The victims were then taken to locations in the county of Ilfov outside of Bucharest, where they were allegedly “sexually exploited” and made to appear in pornographic recordings for online distribution, according to a police statement.

According to police, the suspects intimidated the women, kept an eye on them constantly, controlled them, and used claimed debts to get them to comply with their demands.

What did prosecutors confess?

Prosecutors claim that the victims were coerced into appearing in pornographic recordings that were being sold online. How one toxic masculinity king warped an entire generation: Before being blocked by social media firms, Andrew Tate received more Google hits than Donald Trump because of his anti-women rants.

Andrew Tate is frequently spotted online posing with stunning women, large sums of money, and a collection of fast cars. It’s a way of life that has brought him millions of online fans. According to the police, a total of six victims have come forward and claimed the organized criminal gang sexually victimized them.

Cops withheld the names of the individuals whose Romanian homes were searched, but photographs from the searches looked to unmistakably correspond to images of Tate’s residence that had previously been shared on social media. According to the police, the four suspects were kept for 24 hours while they were being questioned on Thursday.

A former Romanian policewoman’s home was also raided on Thursday, according to local press sources, and she was taken in for interrogation as part of the investigation. Tate, who was raised in Luton, England after being born in Chicago, Illinois, has a questionable image as a result of his numerous business ventures.

He allegedly established a webcam business in Romania with his brother Tristan where young models gave unwary male viewers sob stories. Tate asserts that despite earlier calling the website “a terrible hoax,” he has profited millions from it.

READ ALSO, who is Carla Howe?

Why was Ronald Mkhwanazi fired from Uzalo? Legendary actor is in shock