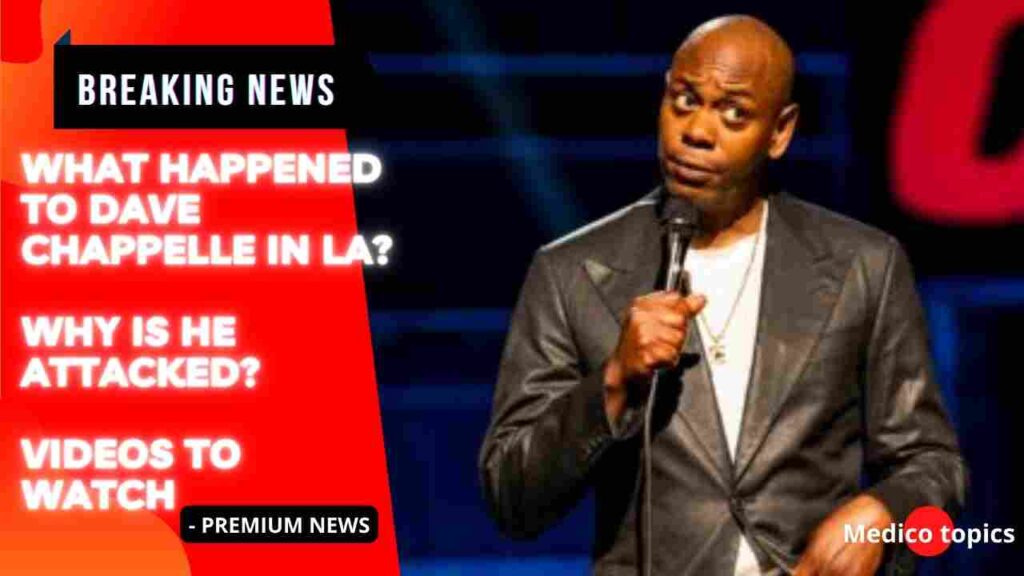 Dave attacked by a man with gun

According to NBC News Los Angeles, the LAPD confirmed that they had taken a guy into custody and that he was carrying weapons with a replica gun “that can eject a knife blade” when fired correctly. It is unclear whether the man attempted to use the weapon.

What happened to Dave Chappelle?

The comedian was performing as part of the Netflix is a Joke festival at the Hollywood Bowl.

Sharon Carpenter, a US reporter, attended the show and shared her experience on social media.

On Wednesday, she tweeted, “Dave Chappelle was just attacked on stage at his Hollywood Bowl show” (4 May).

“As he was finishing up his performance, a man ran on stage and lunged at him, knocking him to the ground.” The man was then cornered by security and his entourage, while Dave joked about him getting stomped backstage.”

Another account from the event came from reporter Brianna Sacks, who stated that “a man charged and tackled” Chappelle as the show was coming to a close.

To prevent content leakage, audience members were not permitted to bring their phones to the show.

However, some people were able to capture footage immediately following the incident. In one video, Chappelle thanks Jamie Foxx for his assistance during the on-stage brawl.

“Whenever you’re in trouble, Jamie Foxx will show up in a sheriff’s hat,” joked Chappelle.

Carpenter recounted what happened in another tweet, this time directly to the camera.

“A man ran onto the stage, lunged at Dave, and knocked him to the ground,” she explained. “And then Dave’s security, his entourage, got the guy off, had him in the corner.

“Dave was on the mic, clearly perplexed by the situation at first, and then began cracking jokes about how he thought it was Will Smith, and how the guy was getting stomped backstage.”

Why was Dave Chappelle attacked?

A man charged onto the stage and tackled the comedian before being dragged off by security at last night’s Netflix Is A Joke event.

Jamie Foxx, who was watching the show from the Hollywood Bowl’s wings wearing a sheriff’s hat, rushed on stage with security to apprehend the attacker.

Chappelle, who sparked outrage in the trans community last year with comments on a Netflix show, appeared to be unharmed and continued with his set, joking, ‘It was a trans man.’

Later in the Netflix is a Joke event, Chris Rock came on stage and joked, ‘Was that Will Smith?‘

Footage later appears to show the assailant being treated for an injured arm by paramedics.

Chappelle thanked Foxx on stage during the curtain call after the attacker was apprehended.

‘Shout out to Jamie Foxx, by the way,’ he said. Jamie Foxx will show up in a sheriff’s hat whenever you’re in trouble.’

‘I thought that was part of a show, I didn’t know what the f***…’ Foxx responded.

‘I grabbed the back of that n**** head,’ Chappelle said. His hair was clumpy. Absorbent.’

‘Listen, I want to say, this man is an absolute genius,’ Foxx added. We must ensure that he is always protected.

‘This means everything to every comedian who comes out here. You’re an absolute genius. You’re a legend, I had a great time, and we’re not going to let anything bad happen to you.’

‘I’ve been doing this for 35 years,’ Chappelle said. Backstage, I just stomped a n****. That’s something I’ve always wanted to do.’

Last year, Chappelle was chastised for jokes about trans people in his Netflix comedy series The Closer.

During the contentious special, he stated that “gender is a fact,” prompting Netflix employees to protest and widespread outrage on social media over some of his jokes.

The attack comes just weeks after Will Smith attacked Chris Rock on stage at the Oscars, sparking fears that similar violent protests against performers would follow.

The event was the first-ever live Netflix comedy festival, and it featured big-name performers such as Seth Rogen, Snoop Dogg, Bill Burr, and Pete Davidson.

I hope we’ve resolved all the doubts about What happened to Dave Chappelle!

0
Reply
How did Regina Reyes Mandanas die? What happened? Cause of death

[…] Why was Dave Chappelle attacked in LA? Explained – Watch Video […]