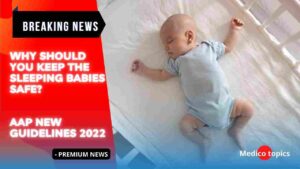 For the first time in more than five years, the American Academy of Pediatrics has updated its safe-sleep guidelines for infants. Let’s see AAP safe sleep babies Guidelines.

After a public education campaign persuaded parents to put their babies to sleep on their backs, the United States made significant advancements in avoiding baby mortality in the 1990s.

But for more than 20 years, the drop in deaths has been stagnant. Experts in safe sleep say more can be done, and they hope the new guidelines will stimulate new action.

These suggestions were made and are now available online in the reputable journal Pediatrics.

For the first time in more than five years, the American Academy of Pediatrics has updated its safe-sleep guidelines for infants, emphasizing that babies should sleep on their backs on flat, level surfaces to lower their risk of Sudden Unexpected Infant Death Syndrome (SIDS).

Sleep-related newborn fatalities are estimated to be 3,500 each year in the United States. Many of these deaths might be avoided, according to the authors of the new guidelines, and parents should take easy precautions to keep their children safe.

What is the best way to protect sleeping babies?

“The best way to protect your baby while they’re sleeping is to follow these guidelines,” said Rachel Moon, MD, of UVA Children’s Hospital.

The new guidelines were developed by the American Academy of Pediatrics’ Task Force on Sudden Infant Death Syndrome and the AAP’s Committee on Fetus and Newborn.

When you put your baby to sleep, it should be on its back in a crib, portable crib, or bassinet that complies with the rules of the Consumer Product Safety Commission, and the crib should be empty other than the child.

What the specialist advise?

In addition, specialists advise breastfeeding whenever feasible because any amount of breast milk is preferable to none. Use of pacifiers and nursing both lower the incidence of SIDS. Parents should refrain from abusing drugs and alcohol themselves or exposing their young children to them.

Additionally, parents are told that “tummy time” when awake is crucial to promote newborn development. However, babies shouldn’t be allowed to sleep on their stomachs.

“With occasional modifications based on new data, these recommendations are generally consistent with earlier recommendations. We want to inform new parents, grandparents, and other newborn caregivers about the best ways to keep their child safe “said Fern Hauck, MD, MS, a member of the AAP Task Force on SIDS at UVA Health.

We also want to let parents know how crucial it is to discuss the recommendations with their child’s doctor in an open setting so that they may voice their opinions and make the best decisions for their child’s care.