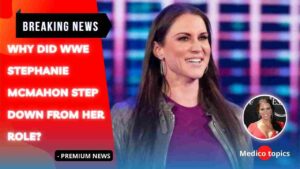 Stephanie McMahon has stepped down as WWE’s chief brand officer for the time being. Let us see why did WWE Stephanie Mcmahon step down from her role.

Stephanie Marie McMahon was born in Hartford, Connecticut on September 24, 1976, to Linda and Vince McMahon. Shane McMahon is her only sibling. The family relocated to Greenwich, Connecticut, shortly after her birth. McMahon first appeared in World Wrestling Federation (WWF) merchandise catalogs at the age of 13, modeling T-shirts and hats.

She attended Boston University after graduating from Greenwich High School in 1994 and earned a degree in Communications in 1998. She began working full-time for the WWF after graduating in 1998.

She debuted in the WWE in 1999 and had a storyline where she was engaged to Triple H onscreen before marrying him in real life.

McMahon took over as the company’s head writer in November 2000, succeeding Chris Kreski. She was elevated to Senior Vice President of Creative Writing in 2006 after serving as the director of creative writing since 2002.

In 2007, McMahon was named executive vice president of Creative. She continued to make TV appearances for WWE as her career progressed, and in 2013, she was promoted to the position of the chief brand officer.

McMahon was promoted to the chief brand officer by WWE on December 4, 2013, where she would oversee efforts to improve WWE’s brand reputation among key stakeholders including marketers, media, business partners, and investors.

During WWE’s annual Business Partners Summit on April 15, 2014, McMahon confirmed that a new WWE logo would premiere the night following WWE SummerSlam, even though it has previously appeared on WWE products such as the WWE Network and NXT.

WWE Stephanie Mcmahon step down from her role

Stephanie McMahon is stepping down as WWE’s chief brand officer for the time being to spend more time with her family.

The 45-year-old fighter-turned-businesswoman confirmed the news in a statement on Thursday (19.05.22), saying she is leaving the organization.

“I am taking a leave of absence from the majority of my responsibilities at WWE as of tomorrow,” she added.

“WWE is a part of my life, and I’m excited to return to the organization I love after taking this time to focus on my family.”

Her wrestler husband Triple H, real name Paul Levesque, had a big health scare in September and had to retire from the ring as a result.

“I will never wrestle again,” the veteran star said on ESPN’s “First Take.” First and foremost, I have a defibrillator implanted in my chest, so getting zapped on live television is probably not a good idea.

“I got viral pneumonia,” she explained. My lungs were irritated, and as the days passed, it became increasingly worse when I returned home. My wife noticed some blood and other things I was coughing up, so I went to the doctor.”

“I was nose-diving and sort of at the one-yard line of where you don’t want to be, for your family and your future,” the 14-time world champion added.

“There are times when they put you out for stuff and you think to yourself, ‘Is this it?’ Do you remember what happened?’ That’s difficult to swallow and makes you reconsider.”

Stephanie is WWE royalty, as she is the granddaughter of founder Roderick ‘Jess’ McMahon and the daughter of chairman and CEO Vince McMahon.

How did Caroline Jones die? What happened? Cause of Death Explained

[…] Why did WWE Stephanie Mcmahon step down from her role? […]