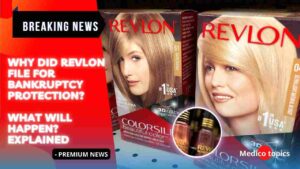 According to a filing with the US Bankruptcy Court for the Southern District of New York, the nail polish and lipstick producer has assets and liabilities ranging from $1 billion to $10 billion.

The bankruptcy filing comes only days after the Wall Street Journal reported that Revlon had began talks with lenders to avert bankruptcy ahead of approaching debt obligations.

Revlon’s sales have suffered as a result of supply shortages and a failure to quickly move to in-demand skincare, and the company has lost shelf space in US retailers to startups funded by celebrities like Kylie Jenner’s Kylie Cosmetics and Rihanna’s Fenty Beauty.

According to the company, the company expects to obtain $575 million in debtor-in-possession financing from its existing lender base, which will assist fund its day-to-day operations.

Is Revlon have issues?

In a news release issued Thursday morning, Revlon President and Chief Executive Officer Debra Perelman said the filing “would allow Revlon to give our consumers the iconic products we have delivered for decades while giving a clearer route for our future growth.”

Perelman continued, “Our problematic capital structure has constrained our ability to handle macro-economic issues to meet this demand.”

What are Revlon’s bankruptcy declarations?

According to Revlon’s bankruptcy declaration, the company is now unable to meet about one-third of consumer demand due to a lack of “adequate and regular supply of raw ingredients.” Revlon estimates that shipping components from China to the United States takes eight to twelve weeks and costs four times as much as 2019 prices.

In what has been a years-long period of retail crisis, Revlon is the first large consumer-facing company to file for bankruptcy protection.

More than three dozen retailers filed for bankruptcy in 2020, an 11-year high, indicating a widespread and Covid pandemic-driven pull-forward of restructuring activity, according to experts.

So far this year, S&P Global Market Intelligence has counted 143 bankruptcies across all industries, the slowest pace since at least 2010. According to S&P, there were only three retail bankruptcy filings in the same period, the lowest number in at least 12 years.

Experts expect that when inflation rises, borrowing rates rise, and consumers cut back on discretionary spending, more retail enterprises will be forced to restructure. Especially because many of these companies are dealing with supply chain issues that have resulted in incorrect inventories.

According to a filing with the United States Bankruptcy Court for the Southern District of New York, the nail polish and lipstick maker, which is controlled by billionaire Ron Perelman’s MacAndrews & Forbes, listed assets and liabilities between $1 billion and $10 billion.

According to a securities filing, Revlon had $3.31 billion in long-term debt as of March 31. As of Wednesday’s close of trading, the company’s market capitalization was nearly $123 million. During the premarket session on Thursday, trading in Revlon shares was halted.

Revlon almost escaped bankruptcy in late 2020, when enough bondholders participated in their debt restructuring program, as stuck-at-home consumers drastically reduced their spending on cosmetic items. Early in November of that year, the company indicated that it might be forced to file for bankruptcy.

Early in November of that year, the company indicated that it might have to apply for Chapter 11 bankruptcy protection.

Revlon has been challenged by start-ups such as Glossier, Kylie Jenner’s Kylie Cosmetics, and Rihanna’s Fenty Beauty as it competes for the dollars of younger consumers.

Given that it owns multiple brands, some of which are performing better than others, Revlon could utilize its time in bankruptcy proceedings to reduce its portfolio, according to David Silverman, a retail senior director at Fitch Ratings.

“If handled well, Revlon may emerge from bankruptcy with a cleaner balance sheet and a healthier operating profile, increasing the company’s long-term prospects,” Silverman added.

Revlon’s financial advisor is PJT Partners, while its restructuring advisor is Alvarez & Marsal.

Beyoncé’s British Vogue Cover: BACK with a banger ‘Renaissance”