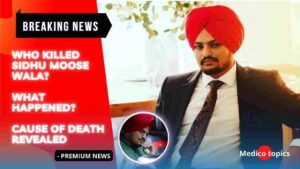 What happened to Sidhu Moose Wala?

#WATCH | Three people were brought to the hospital, out of which Sidhu Moose Wala was dead. After giving primary treatment, the two injured have been referred to a higher institute for further treatment: Dr Ranjeet Rai, Civil Surgeon, Mansa Hospital pic.twitter.com/3j0QAWkofh

Sidhu Moose Wala Cause of Death

The news comes barely a day after the Punjab government, led by the Aam Aadmi Party (AAP), canceled the singer’s security cover. The Punjab Police removed the security of 424 persons, including Sidhu Moosewala, on Saturday, May 28.

Three gangs are reported to be involved in the murder of Sidhu Moosewala, according to sources. According to sources, almost 20 bullets were fired from semi-automatic guns at the Congress leader’s Mahindra SUV.

According to accounts, the attackers arrived in two automobiles and killed Moosewala with automatic rifles. The firing continued for around ten minutes, and no security staff was present with the late singer at the time of the occurrence.

A sedan automobile was seen following Sidhu Moosewala’s Mahindra SUV for a long time, according to Punjab Police officials. In this context, CCTVs are being examined.

Police have detained two people in connection with the murder of Sidhu Moosewala. They’re both members of the Bishnoi gang.

“His security was withdrawn, which led to his shooting. The Mann government and Punjab police have shown total incompetence. Bhagwant Mann should resign from his post. He had received threats before as well “Moosewala’s brother stated

Shagun Preet, the former manager of Sidhu Moosewala, is being investigated for his murder. Shagun’s name has come up in connection with the murder of Vicky Middukhera, and he is claimed to be on the run.

“Sidhu Moosewala was driving his automobile in Mansa district with two other people when two cars arrived from the front and opened fire. He was injured and transferred to the hospital, where he died. It appears to be a gang rivalry “Punjab DGP VK Bhawra said.

According to recent accounts, two more persons were injured in the incident, which saw more than 30 rounds fired. Sidhu Moose Wala was declared dead at the Mansa civil hospital after being admitted in critical condition.

Sidhu Moose Wala relocated to Brampton, Canada after graduating. His first song, “G Wagon,” was released there. In 2018, he began performing live in India. At the 2017 Brit Asia TV Music Awards, he received Best Lyricist for the song. He was nominated for the Best New Age Sensation category at the 2018 PTC Punjabi Music Awards for “Issa Jatt.”

He released his debut film soundtrack song, “Dollar,” in August 2018 for the film Dakuaan Da Munda. At the 2019 Brit Asia TV Music Awards, Moose Wala took up the Best Album Award, as well as Track of the Year, Best International Male Act, and Best Lyricist.

He also worked as a producer on Prem Dhillon’s “Boot Cut.” His track “47,” which featured Mist and Stefflon Don, charted in the top 20 in the United Kingdom. The song also reached on the Hot 40 singles chart in New Zealand. Along with Maninder Buttar and Karan Aujla, he was named one of the most popular singers in Punjab by Spotify in 2019.

Moose Wala announced his second studio album, Snitches Get Stitches, on his Instagram account in May 2020, and it was released the following day. Moose Wala and Shooter Kahlon released “Game” in September 2020, which became his first song to chart on Billboard’s Canadian Hot 100.

Snitches Get Stitches, Moose Wala’s second studio album, was released in 2020 on his own label. Moose Wala’s record label, 5911 Records, will be officially launched on August 31, 2020.

Moose Wala’s third studio album, Moosetape, was published in May 2021 and features 32 tracks. He performed with British rapper Mist at the Wireless Festival in London on September 12, 2021. The first Indian singer to play at the festival was Moose Wala.

Moose Wala’s debut EP No Name, featuring AR Paisley, Mr. Capone-E, and Sunny Malton, was released in April 2022 and debuted at No. 73 on the Billboard Top Canadian Albums chart.

Moose Wala made his Punjabi film debut in the film Yes I Am Student, which he produced himself through his company Jatt Life Studios. On August 24, he confirmed the release date of his latest film, Jattan Da Munda Gaun Lagya, directed by Amberdeep Singh, on March 18, 2022.

Sidhu Moosewala, a popular Punjabi singer, lyricist, and actor who joined the ruling Congress party just a few months before the Punjab Assembly elections, has millions of followers across the country and abroad.

In the presence of President Minister Charanjit Singh Channi and state party chief Navjot Singh Sidhu, the 28-year-old controversial rapper, who performs in Punjabi, joined the Congress in Chandigarh.

Moosewala said he began writing music four years ago but was now ready to take a new step in his life after commencing his political career. “In my village, I still live in the same house.” My father is a retired army officer, and my mother works as a sarpanch. Bathinda and Mansa residents in my neighborhood are linked to me. They have high hopes for me.”

Sidhu Moosewala, a singer, has joined the Cong in Punjab, saying she wants to “raise the voice of the people.”
In the 2019 elections, Congress is expected to select Moosewala as its candidate from Mansa.

“I’m not in politics for the status or the adoration. I want to be a part of the system in order to change it. I’m running for Congress to help people have a stronger voice. I’m joining Congress because the party’s leaders are from ordinary households. “Take, for example, Cabinet Minister Amrinder Singh Raja Warring, who came from a humble background,” he remarked.

Moosewala was recognized as a “youth icon” by both Channi and Sidhu. It was a “huge day” in Punjab politics, according to Channi, who described himself as someone who “understands youth feelings and offers them direction.” Tarun Chugh, the BJP’s national general secretary, was outraged by Moosewala’s admission.

Others Tweeted about Sidhu Moosewala’s Death

“Sidhu Moosewala’s murder in broad daylight surprised me greatly. Punjab and Punjabis around the world have lost a gifted artist with a broad appeal who could read people’s minds. My sincere condolences to his family and followers throughout the world “Randeep Singh Surjewala, a Congress leader, remarked

How did such a sensitive document of @PunjabGovtIndia become public!!
I demand strict action against those who leaked confidential list of people whose security was withdrawn by Govt of Punjab.
First, you withdrew security & then you make them vulnerable by leaking their names! pic.twitter.com/5UcuB9ugyq

The murder of Shri Sidhu Moose Wala, a Congress candidate from Punjab & a talented musician, has come as a terrible shock to the Congress party & the entire nation. Our deepest condolences to his family, fans & friends. We stand united & undeterred, at this time of extreme grief.

“Punjab has realized with a very sad incident today, how deadly it is for any state to go into the chaotic hands of the government. A few days ago the brutal murder of an international kabaddi player and today famous young artist Sidhu Moosewala is raising important questions.”

“The Chief Minister of Punjab and the people running the Aam Aadmi Party’s Punjab government from Delhi will have to think whether they want to become another party like the Congress to give pain to Punjab or really do something for the people. My tribute to Sidhu Moosewala,” he added.

The brutal murder of Sidhu Moosewala is shocking. My profound condolences to the bereaved family. Law and order have completely collapsed in Punjab. Criminals have no fear of the law. @AAPPunjab government has miserably failed. Nobody is safe in Punjab!

“The news about Sidhu Moosewala’s murder doesn’t sink in. Absolutely shocked. My heartfelt condolences to his family and friends. The incident happened a day after Bhagwant Mann govt withdrew his security. Congress will not remain silent on this murder,”

Punjab is up in flames! Is popular singer Sidhu Moosewala’s cold-blooded murder the change AAP promised? Arvind Kejriwal and Raghav Chaddha, who run Punjab by proxy, must be held accountable for this murder. Did they not know of the threat before withdrawing his security?

I may never agree with Sidhu Moosewala but shocking that he has been shot dead in Punjab’s Mansa district days after his security was withdrawn Law & order in Punjab has been completely demolished ever since P-AAP came to power Everyday 1-2 murders..free run for radicals 1/n

SAD’s Daljit Singh Cheema responded to Sidhu Moosewala’s murder by saying, “This is a means to put a stop to the VIP lifestyle. However, I expect a high-level judicial investigation. We’ll also meet with the governor. Raghav Chadda has been provided protection, and CM’s family has been given security… This is directly attributable to the state government.”

“I am deeply saddened and shocked by the horrific murder of Sidhu Musewala..No culprit will be spared..My heartfelt sympathies and prayers are with his family and his fans all over the world. Appeal to all to remain calm.”

I am Shocked and Deeply saddened by the gruesome murder of Siddhu Moosewala. Nobody involved will be spared. My thoughts and prayers are with his family and his fans across the world. I appeal to everyone to stay calm.

The murder of Sidhu Musewala is very sad and shocking. I just spoke to Punjab CM Man Sahib. The culprits will be given the harshest punishment. I request everyone to keep calm and maintain peace. May God rest his soul.

How did Vadim Saralidze die? What happened? Cause of Death Explained

How did Lester Piggott die? What happened? Cause of Death Revealed

1 thought on “Who Killed Sidhu Moose Wala? Reasons & Cause of Death Revealed”