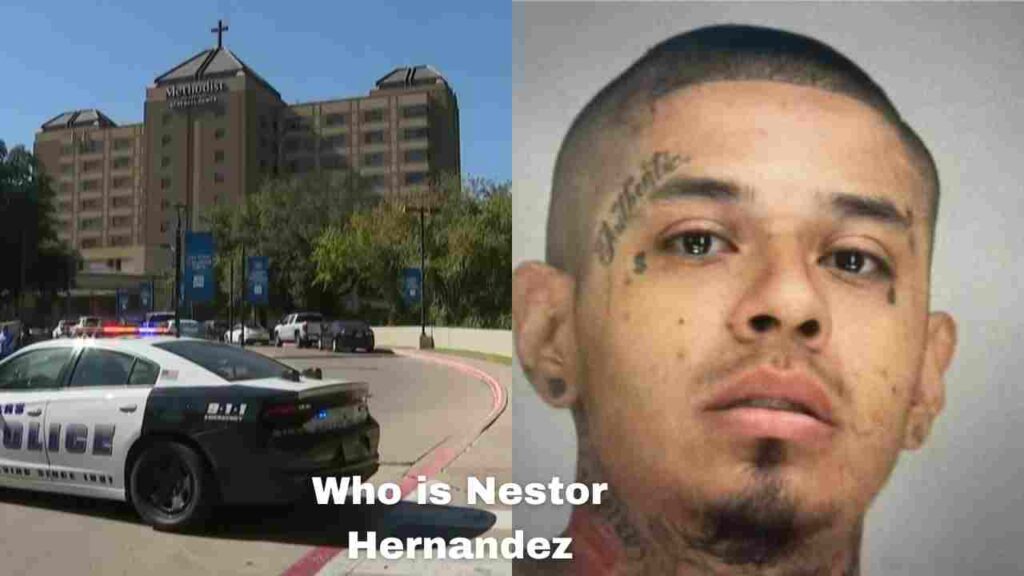 Two workers at Methodist Dallas Medical Center were shot and killed on Saturday, and the alleged shooter has been caught. Let’s see who is Nestor Hernandez and what happened to two maternity nurses in detail.

What happened at Dallas hospital?

As per the Methodist Health System, the hospital’s parent company, a responding officer shot at the suspect, wounding him. Nestor Hernandez, 30, the suspect, was detained on suspicion of capital murder. According to the Dallas Police Department, Hernandez was on parole for robbery and had an “active ankle monitor.”

After fatally shooting two hospital employees early on Saturday morning, a suspect was shot and taken into custody by Methodist Hospital police, according to officials.

Dallas police officers responded to reports of a shooting at Methodist Hospital in the 1400 block of North Beckley Avenue at around 11:15 on Saturday.

“The Methodist Health System Family is heartbroken at the loss of two of our beloved team members,” Methodist Health System Executive leadership said in a statement. “Our entire organization is grieving this unimaginable tragedy. During this devastating time, we want to ensure our patients and employees that Methodist Dallas Medical Center is safe and that there is no ongoing threat. Our prayers are with our lost co-workers and their families, as well as our entire Methodist family. We appreciate the community’s support during this difficult time.”

Why did Nestor Hernandez kill the people at Dallas hospital?

Nestor Hernandez traveled to the hospital to visit his girlfriend after she gave birth to their child, according to an arrest warrant that WFAA was able to obtain. Hernandez started “acting oddly,” according to the warrant, and claimed his partner had cheated on him.

According to the warrant, the suspect then started looking around the room to check whether anyone else was present.

The warrant then claimed that Hernandez took a revolver from his pocket and repeatedly struck his girlfriend in the head with it.

Hernandez’s girlfriend reportedly informed police that he made comments like “We are both going to die today” and “Whoever comes in this room is going to die with us.” according to the search warrant.

Our hearts @DallasPD go out to the those affected by this tragedy,I’m outraged along with our community,at the lack of accountability,and the travesty of the fact that under this broken system,we give violent criminals more chances,than our victims.The pendulum has swung too far. https://t.co/zwJp3cMasv

At this time, police have not provided any other details regarding a potential motive for the shooting. Dallas Police Chief Eddie Garcia expressed his condolences to the victims of the shooting in a tweet and expressed his fury at the “lack of responsibility” in the legal system.

In addition, Garcia referred to it as a “travesty” that “under this dysfunctional system, we offer violent offenders more chances than our victims.”

Who was Nestor Hernandez?

Nestor Hernandez, 30, the suspect, has reportedly been accused of capital murder, according to the police.
Hernandez was now sporting an active ankle monitor and was already on parole for criminal offenses.

It was unclear if Hernandez had hired a lawyer. A request for comment from the county public defender was not immediately returned.

According to the warrant, Hernandez shot and killed the first victim after they both entered the room. The second victim and a Methodist Hospital police officer were in the corridor when they heard the gunshot, according to the search warrant.

Hernandez fatally shot the second victim after she peered into the room. The officer then rushed for cover before shooting Hernandez in the right leg.

After being arrested, Hernandez was transferred to a different hospital for medical attention. According to WFAA’s Rebecca Lopez, the two hospital workers, at least one of them was a nurse, were tragically shot near the hospital’s labor and delivery department. In the labor and delivery area of Methodist Hospital, staff members fled for cover as gunfire rang out.

The Texas Nurses Association (TNA) CEO, Dr. Serena Bumpus, RN, referred to the shooting at Methodist as “unacceptable” in a statement that was made public on Saturday.

The TNA statement cites data from the U.S. Bureau of Labor Statistics that show workplace violence rates have been rising across all workgroups since before the pandemic, but nurses experience violence at a rate of 12.7 violent events per 10,000 full-time employees, which is roughly three times higher than “all other professions.”

In America, two nurses were assaulted on average every hour in the second quarter of 2022, according to the TNA statement, which also cites a recent Press Ganey article. This equates to 57 assaults per day. No one, especially a nurse or healthcare worker, should have to worry about their lives just to go to work, Bumpus said in the statement, “We hope our legislators understand that we need to protect our healthcare workers.”

Tributes to victims of the Dallas shooting

Two nurses were shot and killed today in a hospital in Dallas. If there are angels on this earth, they are nurses. My heart breaks for their families, their teammates, and their patients. Spare me the meaningless thoughts and prayers. This has to stop.

Following the weekend shooting of two nurses at Methodist Dallas Medical Center, we offer the following prayer in compassion and solidarity with our colleagues across Methodist Health System. Gracious God, we turn to you in times of pain and heartache. We ask you to pour out your grace on our sisters and brothers who are closest to this tragedy. Grant them peace in their sorrow, console those who lost a family member, and bring healing to the community as it responds to this violent act.

Two nurses have been shot near the labor and delivery ward inside Methodist Hospital in Dallas, Tx. One of them is in critical condition. Greg Abbott will offer only thoughts and prayers.

Two nurses doing their jobs were murdered in a shooting today at Methodist Dallas Medical Center and it’s hardly made a blip on the radar. Please, let’s not normalize this. What we can do is remove the root cause.

I’ve never been so scared in my life and ran to my phone so fast my friend works at Methodist Hospital in Dallas and they were shooting and two nurses were shot. I can’t with these gun laws! I can’t imagine the trauma that the staff went through. Sending prayers to Dallas.

How did Noreen Bush die? Cedar Rapids Superintendent cause of death Explained

How did Zuri Craig die? AGT star cause of death Explained