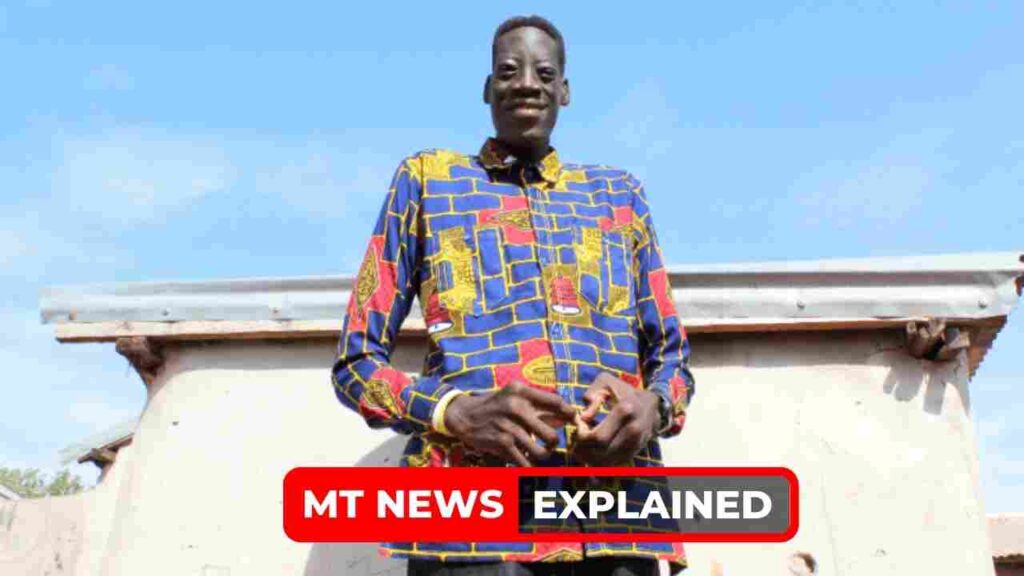 A 29-year-old Sulemana Abdul Samed from Ghana aka Ghanian Giant might be the World’s tallest man allegedly measuring 9 feet 6 inches. Hailing from a village in Northern Ghan, Samed was diagnosed with gigantism a few years ago, as per BBC

A local hospital in northern Ghana told 29-year-old Sulemana Abdul Samed during one of his recent check-ups that he had reached the height of 9 ft 6in (2.89m).

This would make him the tallest man in the world, but there was a catch – the rural clinic could not be sure of his height because it did not have the correct measuring tools.

Diagnosed with gigantism a few years ago, the young man was attending a monthly appointment to deal with the complications of living as a giant when he was asked to stand straight against a measuring rod.

A local hospital in northern Ghana told 29-year-old Sulemana Abdul Samed during one of his recent check-ups that he had reached the height of 9 ft 6in (2.89m). pic.twitter.com/sRVvmaTwSX

A Ghanian Giant has grown taller than the scale

A shocked nurse told him: “You’ve grown taller than the scale.”

He was amused by the spectacle he was creating. He was better known to everyone by his nickname Awuche, which is Hausa for “Let’s Go.”

Given that he has never stopped growing, he was not astonished to learn that he was taller, but the staff was alarmed because they were unprepared for the situation.

The on-call nurse yelled for assistance to a colleague, who then yelled to a different person. Soon, a team of nurses and medical assistants assembled to figure out the mystery of how tall he was.

They arrived at their estimate by using a pole as an extension over their stick, as proposed by one of the groups.

According to the source, I did not have a measuring tape with me to confirm Awuche’s height when I first encountered him a few months ago while traveling in northern Ghana, where his legend had spread over the region’s grasslands.

In order to resolve the issue, I went back to Gambaga last week armed with a 16-foot measuring tape. The idea was to have him lean against a wall, mark the spot with the measuring tape at the top of his head, and then measure his height.

Awuche was pleased with my strategy to achieve an exact measurement and said, “The way they measure me, I cannot claim everything is flawless.” He turned out to be taller than most of the houses in his neighborhood, but after a good search, we found a suitable building with a high-enough wall.

He removed his shoes, which were big slip-ons that a local handyman had built for him out of car tires because he had trouble finding shoes that fit. To get to Awuche’s height and mark the wall with some charcoal, one of his neighbors climbed up on a wooden stool.

Awuche watched in eagerness as we carefully extended the measuring tape from the indicated line to the ground after double-checking the line. I said, “Awuche, the tape measures 7ft 4in.”

Wow, so what does it mean, he retorted while flashing his signature smile. The tallest guy living is only a little taller than you at 8 feet, 2.8 inches.

How can someone still keep growing tall after reaching 9.6 feet already❗️❗️😱😱

Meet Sulemana Abdul Samed aka Awuche who happens to be the tallest man in Ghana and is still growing taller😮. pic.twitter.com/5r9KcKnaiZ

His Height became noticeable when he was 22 years old

When Ghanian Giant was 22 years old and residing in the capital, Accra, this height gain first became noticeable. After completing his secondary education, Awuche relocated there to try his luck in the city where one of his brothers resided.

He was saving money by working at a butcher shop so that he could enroll in driving lessons. But he remembers being confused when he awoke one morning and discovered that his tongue had grown so large in his mouth that he was unable to breathe normally.

He went to a nearby drugstore to purchase some medication, but days later he saw that every other portion of his body had begun to enlarge. When family and friends from his village visited the city, they would all remark on his growth spurt and it was at this point he realized he was gradually turning into a giant.

Tower over everyone- Side effects and Treatments

This Ghanian Giant began to tower over everyone – and he sought medical help as the growth brought other complications. One of the most noticeable indications of his condition, Marfan syndrome, a genetic disorder affecting the connective tissues of the body, is that he has been left with an unusually curved spine.

It causes limbs to grow unnaturally lengthy. Heart defects are more serious side effects. According to his medical professionals, he requires brain surgery to stop the growth.
However, Ghana’s public healthcare system, which only offers minimal care, cannot cover this. He still needs to raise roughly $50 (£40) for each hospital visit.

He eventually had to return to his hometown six years ago due to health issues, giving up his ambition to become a driver.

“I was planning to go to driving school, but even when I shift the seat back, I can’t hold the steering wheel… I can’t stretch my leg because my knee will knock the wheel.”

He is now living with his brother – and gets by after setting up a small business selling mobile phone credits. His height has also curtailed his social life. “I used to play football like every other young man, I was athletic but now I cannot even walk short distances,” he explained.

Who is james ? BF defiled 13 year old girl of Luanshya in drunken state