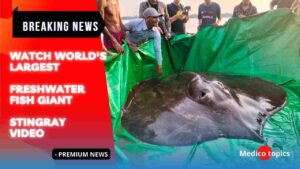 A fisherman grabbed a gigantic stingray, the world’s largest freshwater fish, according to biologists.

The fish was about 13 feet long and weighed 300 kg. It was captured on June 13 in the Mekong River in Cambodia’s northeast, south of Stung Treng.

According to scientists, the previous record was held by a catfish that weighed 293 kg and was discovered in Thailand’s Mekong River in 2005.

A post shared by Wonders of the Mekong (@mekongwonders)

The group of residents and researchers can be seen in the film lowering the stingray’s tarp back into the water. As the tarp is pulled from under the animal and it sinks into the murky water, many people can be heard saying “goodbye.”

Where did it Caugh?

A fisherman in northern Cambodia was taken aback when he accidently hooked the world’s largest freshwater-only fish, according to researchers.

The fish, identified as a giant stingray, weighed 661 pounds and was 13 feet long from snout to tail.

According to National Geographic, the stingray was captured on June 13 on Koh Preah island on the Mekong River in the Stung Treng area by a fisherman named Moul Thun.

Thun, 42, phoned experts from the Cambodia-based research group Wonders of the Mekong the next morning, and they were dispatched to assist the fishermen in evaluating the species.

The scientists and a large number of locals manoeuvred the big stingray onto a tarp in order to examine, measure, and weigh the fish on three scales adjacent to each other.

Boramy, which means “full moon” in Khmer, Cambodia’s official and national language, was given to the stingray. The stingray was found to be female and in excellent health. The fish was then tagged with a tracking tag and released.

Of course, there are larger fish in the sea. The whale shark can weigh like 41,000 pounds.

And the Beluga sturgeon, which inhabits both salt & freshwater, can tip the scales at several thousand pounds.

But for the freshwater-only, the stingray is QUEEN.

Wonders of the Mekong reported on Instagram that this was the first time a freshwater stingray had attempted acoustic tagging. Researchers will be able to track the stingray’s travels and learn more about how the species interacts in the Mekong thanks to the tag and its signals.

Jason Bittel, a science writer, expressed his surprise at the stingray’s discovery on Twitter.

Bittel said the Wonders of the Mekong team was able to set up 36 underwater acoustic receiver stations to better track the tagged stingray in a Twitter thread. He claims that by doing so, the team would be able to track the animal for up to a year, something he claims has never been done before.

What happened to Fish tail?

I see they got the silencer on it. pic.twitter.com/10ELb9Upow

The simple connection, he claims, limits the fish’s ability to sting attackers – a sting so strong it can pierce human bone.

The finding of the giant stingray fills Zeb Hogan, a biologist best recognised for his work recording large species on the TV show Monster Fish, with hope, according to National Geographic.

He told National Geographic, “It confirms these underwater leviathans, which are in severe danger, still exist.”

The stingray is anticipated to live in the wild, according to researchers from The Wonders of the Mekong.

According to NBC, the fisherman received market value for his catch.

“It works because the fish isn’t a high-value food fish,” Hogan explained to NBC.

The stingray shattered the previous record for greatest freshwater catch, which was held by a Mekong giant catfish weighing 646 pounds. The catfish was caught in Thailand in 2005, also on the Mekong River.

How did Colin Grainger die? What happened? Cause of Death Explained