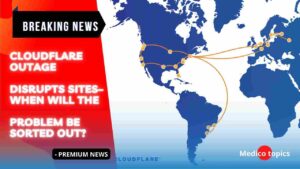 Cloudflare said on its website around an hour after the outage was discovered that the problem had been resolved.

Cloudflare stated that the problem was a significant technical fault that caused the service network to be disrupted across “broad regions,” implying that the outage likely affected apps and sites all over the world.

The business went on to say that the problem affected “all data plane services,” implying that a problem with the company’s servers interrupted the data transfer protocol, which is essential for a website to function.

What if Cloudflare is unavailable?

The internet notices when Cloudflare goes down. When Cloudflare experiences issues, the rest of the internet isn’t far behind. On Friday, the corporation whose entire raison d’être is to ensure the stability of companies’ websites and internet-connected services ran into some online difficulties.

What caused the outage at Cloudflare?

Cloudflare stated that the problem was a significant technical fault that caused the service network to be disrupted across “broad regions,” implying that the outage likely affected apps and sites all over the world.

Although not often, outages like this can disrupt large swaths of the internet, knocking down a variety of prominent websites and apps that are utilized on a daily basis. Fastly, a fellow CDN provider, experienced a similar outage in 2021, bringing down a number of important sites like game streaming platform Twitch, music detection platform Shazam, online forum Reddit, and code repository site GitHub, and others.

A CDN is a large network of distributed servers that helps a website reduce the time it takes to send data from a server where its data is kept to its front-end for users to view. Data transfers via central servers used to take substantially longer on websites before the advent of CDNs. By locating servers closer to the source location of a user request, a CDN substantially lowers the time it takes for a site to show information.

As a result, the majority of prominent apps and websites use CDNs as part of their network infrastructure. Because of their general stability, most sites do not have a backup plan because their infrastructure is so reliable.

Doug Madory, director of internet analysis at American IT services firm Kentik, noted at the time that the reason such failures frequently take down large portions of the internet when an issue occurs is due to the overall expense of such equipment, as well as its general reliability.

How did Colin Grainger die? What happened? Cause of Death Explained

[…] Cloudflare outage disrupts sites– When will the problem be sorted out? […]

0
Reply
How did Danielle Hampson die? Cause of Death Explained

[…] son Bowie KEEP READING, How did Caleb Swanigan die? What happened? Cause of death Explained Cloudflare outage disrupts sites– When will the problem be sorted out? Follow us on Twitter to get instant notifications and news. […]