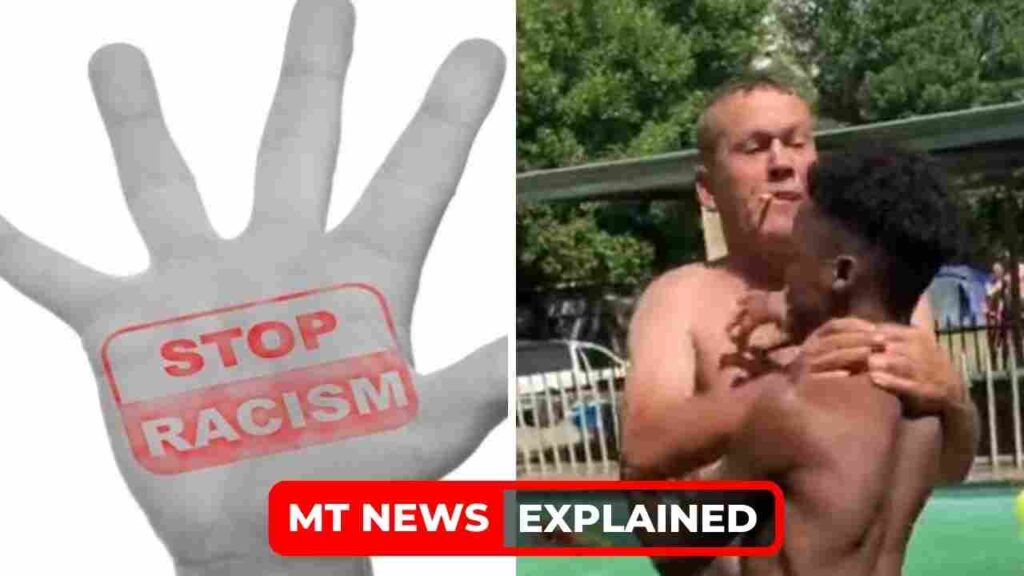 Three adult white males have been arrested in connection with the alleged racial attack at the Maselspoort Resort and Conference Centre in Bloemfontein, Free State. Let’s see more details about the controversial incident.

A group of suspected white supremacists adult men, attacked some Black children at the MASELSPOORT RESORT & CONFERENCE CENTRE in Free State, South Africa, because the Black boys were swimming in a pool that is allegedly for whites only pic.twitter.com/uZUDXqdJAU

Who are Johan Nel and Jan Van der Westhuizen ?

According to a statement released by the police on Wednesday, the first two suspects have been connected to the racial incident at the resort. They are Johan Nel, 33, of Bothaville, Free State, and Jan Stephanus van der Westhuizen, 47, of Brandfort. Both have since been charged with assault and crimen injuria, and a third suspect was taken into custody for attempted murder.

Makhele said both Nel and van der Westhuizen were released on warning, with the matter having been postponed to January 25. The third man, a 48-year-old Bloemfontein resident, will remain in detention and appear in court on Thursday, according to Brigadier Makhele.

The investigating team, which worked diligently to ensure that these criminals are arrested as quickly as possible, was complimented by the provincial commissioner.

Before the video started, these two pushed a 3 year old girl into the pool https://t.co/yO0Xrf4aiZ

President Cyril Ramaphosa has demanded that swift action be done against those guilty for the alleged racial incident that allegedly occurred at the Maselspoort Resort and Conference Centre on Christmas Day. The incident happened in the Free State, roughly 20 kilometers outside of Bloemfontein.

This happened after a video emerged on social media where two teenage black boys, ages 13 and 18, were attacked and assaulted by a group of white male adults.

To be United always and Follows Non- Violence

A swimming pool at the Maselspoort resort is purportedly only for the use of white people, according to the footage, which has gone viral internationally and sparked outrage across the nation. Some adults are seen attempting to stop the boys from using the pool.

According to Ramaphosa, these kinds of acts must be eradicated from society because they polarised rather than united the nation. We must unite together to rid our culture of the violence depicted in the recordings of the event at the Free State resort, whether or not such violence is motivated by racism.

“It is deplorable that adults dealing with teenagers resort to violence with such disturbing ease, hurting people physically and offending provisions in our Bill of Rights around the security of the person, including the right to dignity and being free of violence,” the President said.

What did the Investigation team say?

The racist altercation that occurred on Christmas Day at the resort, according to Makhele, was the result of a 24-hour investigation team effort. “We can report that three suspects have been detained today; the first two are Johan Nel, 33, and Jan Stephanus van der Westhuizen, 47, both of Bothaville and Brandfort, respectively.

According to Brigadier Makhele on Wednesday, “the two appeared in court on counts of assault common and Crimean Injuria, and the matter was postponed to January 25, 2023, while being freed on warning.”

“The third suspect, a 48-year-old resident of Bloemdal in Bloemfontein, was arrested just after noon and will be charged with attempted murder. He will remain in custody and is expected to appear in Bloemfontein magistrate court on Thursday, December 29, 2022, on the main charge being attempted murder,” Makhele said.

A video clip shared on social media captured part of the incident at the resort. It depicted white men ordering a black teenager out of the water, then hitting or shoving him back in, grabbing a child by the throat, and pulling his hair as the fracas escalated. One man was also seen holding a youngster under the water.

EWN owns footage from the #MaselspoortResort where 2 black teens were attacked by white men claiming the common pool is reserved for ‘whites only’. Three people are facing common assault, crimen injury, and attempted murder charges.

UPDATE: EWN is in possession of footage from the #MaselspoortResort where 2 black teens were attacked by white men claiming the common pool is reserved for ‘whites only’. Three people are facing common assault, crimen injuria and attempted murder charges. @khanya_mntambo https://t.co/lJvAO0CmK6 pic.twitter.com/FtTLaS6YG0

Three people have been arrested for the #MaselspoortResort attack. Johan Nel and Jan Stephanus van der Westhuizen have already appeared in court for common assault and crimen injuria. The third suspect will appear in court tomorrow for attempted murder.

JUST IN: Three people have been arrested for the #MaselspoortResort attack. Johan Nel and Jan Stephanus van der Westhuizen have already appeared in court for common assault and crimen injuria. The third suspect will appear in court tomorrow for attempted murder.@khanya_mntambo https://t.co/lJvAO0CmK6

Under the Racial Discrimination Act 1975, it is unlawful to do any act involving a distinction, exclusion, restriction, or preference based on race, color, descent, or national or ethnic origin which has the purpose or effect of nullifying or impairing the recognition, enjoyment or exercise, on equal footing, of any human right or fundamental freedom in the political, economic, social, cultural or any other field of public life. The Act also prohibits offensive behavior based on racial hatred.

“Why should I have to apologize for something that happened over 200 years ago? Consider it survival of the fittest.”

Not just the younger generation, but each individual should be mindful of the consequences while they are engaging in illegal Activities.

How did Linda de Suza die? Popular Portuguese Singer Cause of death Explained