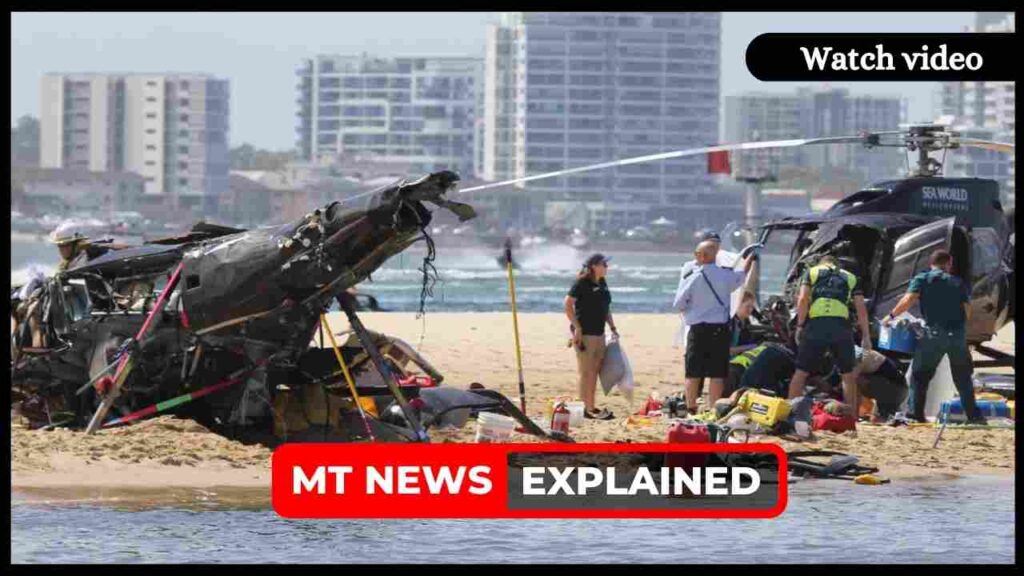 According to acting Queensland state police inspector Gary Worrell, the two helicopters that collided at the Sea World amusement park in Main Resort, a northern Gold Coast beach, appeared to have been taking off and landing, respectively.

While one helicopter successfully touched down on a sandbar, the other’s wreckage was dispersed throughout what the police characterized as a difficult-to-access location.

They were all passengers in the downed helicopter, including the three people who were critically hurt. Members of the public and police attempted to rescue the victims from the upside-down aircraft, Worrell added. They also started administering first aid.

Jet ski riders, family boaters, and regular citizens flocked to help these people. Medical help is also being provided to passengers in the other helicopter, which lost its windscreen in the collision.

#MainBeach – Multiple QAS resources and other emergency services are on the scene of a major incident involving two helicopter at 1.59pm. No further details at this time.

What happened to the people?

13 individuals were on the two helicopters, according to Queensland Ambulance Service spokesperson Janey Shearman. Six other persons were also rushed to the hospital with minor injuries, mostly from the impact of the glass, in addition to the three gravely injured individuals who were experiencing “multi-system trauma.”

A helicopter was clipped by another aircraft that was flying over the lake in the crash footage just after takeoff. A separate firm from the theme park, Sea World Helicopters, sent its sympathies and stated that it was assisting the investigators looking into the tragedy.

The statement read, “We, and the entire aviation community, are horrified by what has happened. Our profound condolences go to all those affected, especially the loved ones and family of the deceased.

The company declined to comment further due to the ongoing inquiry, declining to disclose if it operated one or both of the helicopters involved in the tragedy.

Customers at Sea World heard the crash, and staff moved quickly to block off the areas nearest to the crash, a witness called John told Melbourne radio station 3AW.

He remarked, “There was a huge, huge bang. “It was just enormous. “It may have been the propellers or something else rubbing against each other, but I’m not sure. However, there was a crying mother and her son standing next to the helipad.”

The event, according to Premier of Queensland Annastacia Palaszczuk, was “an unfathomable catastrophe.” She expressed her sincere condolences to all the families and individuals impacted by the sad disaster. An inquiry into the crash’s cause is ongoing, according to the Australian Transport Safety Bureau.