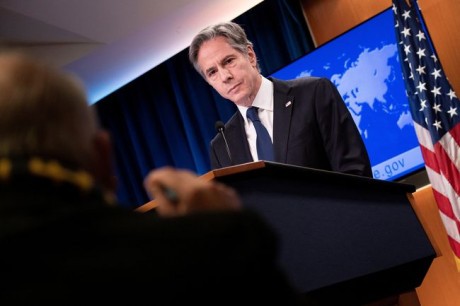 US Written Response to Russia: The US government has submitted written proposals aimed at maintaining security in Europe and deterring the Russian invasion of Ukraine.

This was stated on Wednesday during a special briefing in Washington by US Secretary of State Anthony Blinken, Ukrinform reports.

“Today, US Ambassador to Russia Sullivan gave a written response to Moscow,” he said.

According to him, the document contains concerns of the United States, as well as allies and partners in connection with Russia’s actions that undermine security in the region; principled and pragmatic assessments of Moscow’s concerns; US proposals in areas where both sides can pursue mutual interests.

“We have made it clear that there are key principles we seek to uphold and protect, including Ukraine’s sovereignty and territorial integrity, as well as the right of countries to choose their own path of security and participation in alliances,” he said.

Blinken noted that the written document reflects the position he personally expressed in Kyiv, Berlin, and Geneva last week. In this context, the Secretary of State stressed that the United States is open to dialogue and prefers diplomacy. But to do so, Russia must stop escalating around Ukraine, propaganda rhetoric and ensure the principle of mutual fulfillment of commitments in negotiations on future security in Europe.

“Our response was in full coordination with Ukraine, our European allies and partners,” Blinken said.

He added that the United States does not intend to publish Russia’s written response, “because we believe that diplomacy will have a better chance of success if we provide space for confidential talks.” The US foreign minister also expressed hope that the Russian side would follow the same approach.

In addition, the US Secretary of State said that NATO has also developed and will soon submit to Moscow its own document “which will contain ideas and concerns about collective security in Europe.”