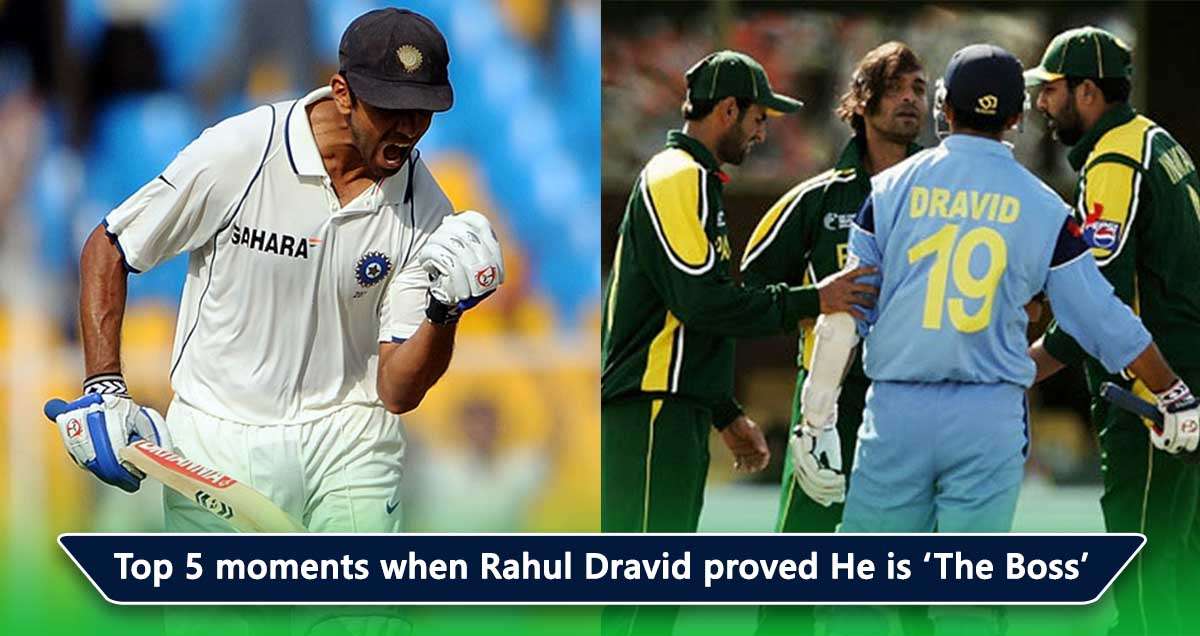 Rahul Dravid is widely considered to be one of the most modest cricketers ever to play the game. If the reputation of cricket as a gentleman’s game is to be proven, all one has to do is look to Rahul Dravid. The Bangalore-born Indian batsman has often proven that hostility does not have to be communicated via words; it can be done far more effectively by playing good cricket.

Rahul Dravid didn’t participate in any on-field banter or debates, but it doesn’t mean he didn’t respond to sledges and critics. He’s had his fair share of occasions where he has shown anger and aggressiveness while being polite.

Here are the top 5 moments in Rahul Dravid career when he proved that he is unstoppable.

This occurred during the 2001 Border-Gavaskar Trophy when India needed 70 runs to overtake Australia’s 173-run advantage. Damien Fleming delivered a short delivery at this point, which was pulled by Rahul Dravid and allegedly caught by Michael Slater at mid-wicket. The on-field umpires sought assistance from the third umpire, who decided in favor of the batters since there was no clear proof of a fair catch.

Michael Slater was unable to accept that he had lost the game and instead began criticizing Rahul Dravid. For that, the entire Australian team went after Rahul Dravid, slamming him practically every delivery. Dravid, on the other hand, kept his cool and responded with his bat to the egotistic Aussies, completing his century to push India beyond 600 runs. And that’s how this match is at the top in our 5 moments of Rahul Dravid.

In the first over of the game, Dravid, who was captaining the Rajasthan Royals and opening the batting for them at the time, faced the fiery Australian fast bowler. With an off-drive, he despatched Johnson for four runs after playing out three dot balls.

An enraged Johnson then went on to speak a few things to the experienced batter, escalating their heated exchange from the previous game. Both players were a little irritable on the pitch, but Dravid had an unusual response.

In the following over, the elegant batsman struck Johnson for a magnificent boundary and then asked Johnson, “How was that for a boundary?” He next smashed a streak of consecutive boundaries to Johnson, which has become his defining reaction throughout his career.

3. After being smacked on the jaw, Dravid crushes the West Indies

In the first match in a 200-match bilateral series, Brian Lara’s West Indies posted a massive total of 501 against Sourav Ganguly’s India at Georgetown Cricket Club, despite the rain. Despite failing to reach the massive score, India managed to frustrate the West Indies’ formidable bowling assault throughout the first Test match at Georgetown.

Dravid was struck on the jaw with a vicious bouncer bowled by a furious Mervyn Dillon in the high-octane match. Dravid, on the other hand, had steely resolve as he tortured the West Indies bowling attack with his batting masterpiece.

Dravid went on to hit 144 runs in the test match, becoming the ninth Indian batsman to record ten or more centuries at the time.

When James Anderson began delivering vicious bouncers to Rahul Dravid, followed by aggressive sledging, things got extremely hot in a World Cup group stage match between India and England in 2003. In the last overs of the contest, Rahul Dravid was comfortable on the ground and ready to shift to high gear. James Anderson bowled a lethal bouncer in the 46th over of the contest, which smacked straight on Dravid’s rib cage, causing him terrible pain.

While everyone’s expectations, Rahul Dravid managed to remove the guard despite being in terrible pain. Another bouncer was thrown by James Anderson on the following delivery, but this time Dravid played his classic hook shot to put the ball right into the stands for a six, completing his half-century.

This happened in 2006 when the Dravid-led Indian side traveled to Pakistan to face Inzamam-ul-Haq’s devastating fast bowling attack. Pakistan scored a staggering 679 runs in the first test to put India on the back foot. In response, India got off to a fantastic start in Lahore, with Dravid and Sehwag demonstrating their skill on a level surface. Shoaib Akhtar the Rawalpindi express, on the other hand, does his hardest to get under the skin of both batters with his raw speed and furious sledging.

Shoaib Akhtar began aggressively staring Rahul Dravid after every ball, most of which were bouncers while bowling at a deadly pace. The Wall, on the other hand, didn’t flinch and gazed back at the pacer without blinking. Despite his continuous attempts, Akhtar’s plans were never fully realized, as neither Pakistani bowler was able to achieve any success, and the match ended in a tie.

Rahul Dravid hit a stunning century with 124 runs, while Virender Sehwag smashed a double century from the other end. The opening partnership between Dravid and Sehwag was 400+ runs, only a few runs shy of the biggest opening partnership ever. The following is a video of their epic showdown:

And that’s all, these are the 5 best moments when Rahul Dravid showed who is the Boss. Tell us your comments, which one you think is cool.

Related post – Happy birthday Rahul Dravid! Here’s all you need to know about the cricketing legend’s life off the field