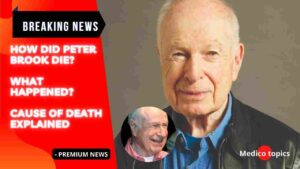 Theatre and film director Peter Stephen Paul Brook was from England. He passed away at 97 years old. Let’s see how did he die, what happened, and what was Peter Brook Cause of Death.

How did Peter Brook die?

Peter Brook, one of the finest theatre directors of the 20th century, passed away on Saturday. His ambitious, risk-taking, and constantly inventive stage work spanned seven decades on both sides of the Atlantic. He was 97.

His son Simon acknowledged his passing but did not provide any other information.

The director Peter Hall once referred to Peter as the “quester,” or the one who is constantly exploring new territory and seeking out the truth in theatre.

What happened to Peter Brook?

According to “Variety,” Peter Brook, a British-born director best known for his theatrical work on Broadway’s “Marat/Sade” and “Irma La Douce” as well as experimental plays like “The Mahabarata,” has passed away. Brook won Tonys, Emmys, and the Padma Shri award last year. He was 97.

On Sunday, Brook’s longtime publisher and later the BBC both acknowledged his passing. Since the 1970s, he had resided in Paris, where he passed away.

Peter Brook Cause of Death

One of the greatest theatre directors of the 20th century, Peter Brook, died on Saturday. Over the course of seven decades, he produced ambitious, daring, and consistently innovative stage work on both sides of the Atlantic. He was 97.

Simon, one of his sons, recognized his father’s passing but said nothing more. According to Twitter speculation, peter brook cause of death was a natural illness.

Peter Stephen Paul Brook, the son of Jewish immigrants from Latvia, was born in London on March 21, 1925.

Involved in revolutionary movements after leaving his Baltic village for Moscow, his father, Simon Bryk, was forced to flee.

He first went to Paris and subsequently to London, where he settled and anglicized his name. He and his wife Ida both made it big in London as industrial chemists.

The youngest of their two kids, Peter, attended private schools where he experienced bullying and was miserable. At age 16, he was awarded a spot at Oxford University. Due to a childhood ailment, Brook was spared from World War II military service.

When he was seven, Peter performed a four-hour performance of Hamlet in a toy theatre for his parents, citing “P. Brook and W. Shakespeare” and taking on all of the roles himself. But because he subsequently described theatre as “a gloomy and dying predecessor of cinema,” and because he wanted to be a director, he rarely went to the movies as a young lad. After ignoring his studies to work for the University Film Society, which he had started in 1943, he almost got kicked out of Oxford.

He accepted a position with a business that specialised in creating ads after graduating. However, his employment was terminated in shame after he produced a “Citizen Kane”-inspired washing powder commercial.

In a little theatre in London, his undergrad production of Marlowe’s “Doctor Faustus” brought in 17 British pounds for the Aid to Russia Fund. Additionally, in 1945, he oversaw the London fringe productions of Rudolf Besier’s “The Barretts of Wimpole Street” and Cocteau’s “The Infernal Machine.”

These gained Mr. Brook the notice of Mr. Jackson, who founded and oversaw the renowned Birmingham Repertory Theater, and led to an invitation for him to direct a touring production of George Bernard Shaw’s “Pygmalion” for the British Army.

There, Mr. Brook successfully directed Shakespeare’s “King John” and Shaw’s “Man and Superman,” and he also developed a professional relationship with Paul Scofield, who played a key role in each piece.

Both guys were present when Mr. Jackson took over the Stratford Summer Festival in 1946. Brook wed the actress Natasha Parry in 1951. Irina, an actress and filmmaker, and Simon, a director, were their two offspring. At age 84, Parry passed away from a stroke in July 2015.

Other names for Mr. Brook included maverick, romantic, and classicist. But he refused to be boxed in. His extremely innovative Broadway productions of Peter Weiss’ “Marat/Sade” and Shakespeare’s “A Midsummer Night’s Dream” won him Tony Awards in 1966 and 1971.

He is British by nationality but has been based in Paris since 1970. He produced entertaining productions like “Irma La Douce” and “A View From the Bridge” by Arthur Miller.

But he was also a risk-taker and an experimenter. In 1987, he brought a breathtaking nine-hour production of the Sanskrit epic “The Mahabharata” to New York from France.

With “The Man Who,” a stark staging of Oliver Sacks’s neurological case studies, he took the similar approach in 1995. When he was 86 years old in 2011, he performed Mozart’s “Magic Flute” in a very identically scaled-down performance at the Lincoln Center Festival.

Over the course of his lengthy and well-regarded career, Mr. Brook staged approximately 100 productions. He was restless and unpredictable.

Shakespeare Award from the Freiherr von Stein Foundation, 1973. Dominique Grand Prix, 1975. 1975 Brigadier Award for Timon of Athens Award from the Society of West End Theatre, 1983. 1984 Emmy Award for “The Tragic Story of Carmen.”

The inaugural recipient of the NOK 2.5 million (about £200,000) Ibsen Award for 2008 was. 2008 Critics’ Circle Award for Outstanding Contribution to the Arts

1965 saw the appointment of a British Empire Commander. 1983 saw the induction into the American Theater Hall of Fame.

1990: Honorary DLitt from the University of Birmingham. 1991: Honorary Fellow at Oxford’s Magdalen College.

Sad news. The man was a giant in our field. Asking bold questions and rigorously refusing to settle for mediocrity. His influence changed everything about western theatre, even the design of some of our buildings. RIP Peter. Rest well, sir.

“Peter Brook was the singular theatre practitioner of the last century, both fearless and peerless in his enquiry into the breadth and depth of the form. It is with great sorrow that we mourn his passing, and celebrate his extraordinary life in art.” Rufus Norris

All of us at NHB are very sad to hear of the death of legendary director Peter Brook, at the age of 97. We’re honoured to have been Peter’s publisher for the past twenty years, sharing his wisdom and insights with the world. He leaves behind an incredible artistic legacy. RIP.

Peter Brook is dead. An age passes. Interviewing him was like spending time with Prospero, if Prospero had a sense of humour. (Brook thought it appropriate that a man called Looney invented the theory that the Earl of Oxford wrote Shakespare’s plays.)
Luke Bames said,
Peter Brook has left us. I met Peter when he came to see my play The Jumper Factory at The Young Vic a few years ago and was lucky enough to meet him. Peter gave me life changing advice about life and Art. “The only question you have to ask is how am I useful?”. Changed my life.
M Goldfarb said,
Peter Brook: In 1970, a student, in Stratford by chance got a ticket to whatever was on. It was opening night of the Dream. Everything I’ve seen since is compared to that. 5 years later I met him in NY, 40 years after that @bbcradio3 let me tell the story.
Amir Taheri said,
A thought for Peter Brook, British theatre director who has passed way aged 97. As an innovative director he reached the peak of his fame in the Shiraz-Persepolis Festival where he offered his version of ” pure theatre” in the play “Orghast” with a cast of Iranian actors,
Simon McBurney said,
Peter Brook, visionary, provocateur, prophet, trickster & friend with the bluest eyes I ever saw, has left the house.“…take an empty space, call it a bare stage. A person walks across whilst someone else is watching them… all that’s needed for an act of theatre to be engaged.”
KEEP READING,
What happened? Is Yazmin Oukhellou alive? Jake McLean Cause of death
How did Antonio Cripezzi die? What happened? Cause of Death Explained
Follow us on Twitter to get instant notifications and news.
kavi