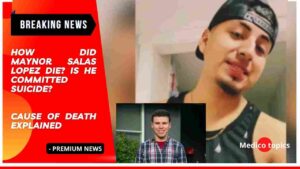 Where the Maynor found?

The 21-year-old guy who was found dead in a Saugus lake on the Breakheart Reservation on Sunday has been identified.

The person has been identified as Lynn resident Maynor Salas Lopez, according to the State Police.

Maynor Salas Lopez Cause of Death

Lopez, who was present at the reservation with his family, allegedly entered the lake and started to struggle there.

When Lopez was discovered and taken from the water by Saugus Police Officers Thomas DiPietro, David Harris, and Jenna Fennelly, emergency personnel started performing CPR on him.

He was brought to the hospital, where he later passed away, Melrose-Wakefield. According to the information, Maynor Salas Lopez’s Cause of death was unconsciously entered into the lake.

Who is Maynor Salas Lopez?

Lopez, who was at Breakheart Reservation in Saugus with family members, entered Silver Lake “for reasons still under investigation” around 5 o’clock and “started to wrestle in the water,” according to a statement from State Police. He had just turned 21.

According to an initial inquiry, Lopez, who was at Breakheart with his family, entered Silver Lake around 5 o’clock and began to wrestle in the water for reasons that are yet unknown.

State troopers and Saugus police arrived on the scene. He was rescued from the river by three Saugus police officers, and emergency personnel immediately began CPR.

What happened to Maynor Salas Lopez?

Lopez was taken by ambulance to Melrose-Wakefield Hospital, where he received emergency care but continued to be in a critical condition. Early on Monday morning, he died.

The issue is not being looked into.

Boy died in River Tyne in Northumberland: what happened, Explained