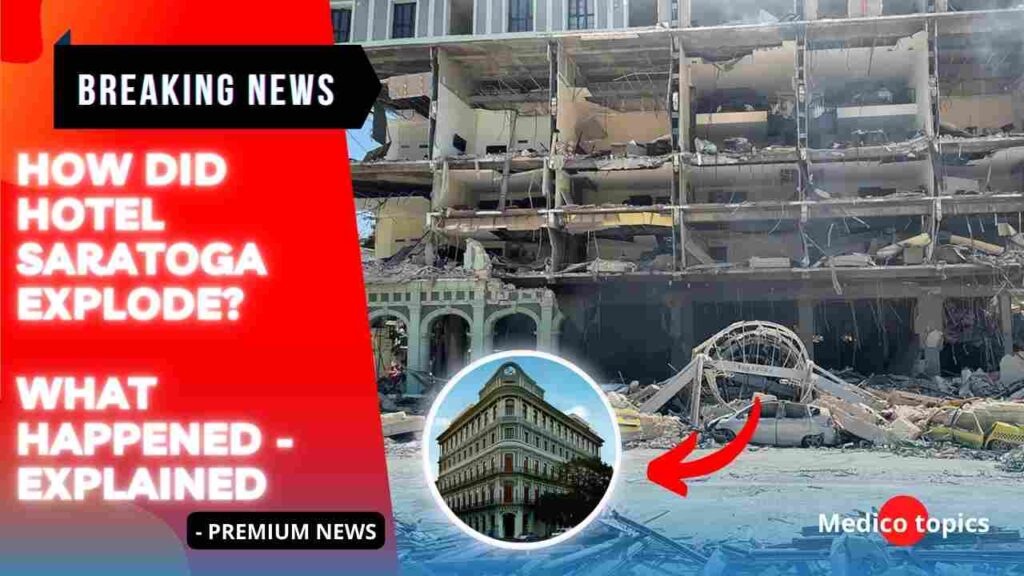 A deadly explosion struck a well-known hotel in downtown Havana, tearing a gash several floors high in the building’s side, killing at least 22 people and injuring up to 70, according to witnesses and state media. Let’s see how did Hotel Saratoga explode.

Cause of explosion at Hotel Saratoga

President Miguel Diaz-Canel, speaking from the scene on Cuban television, said the blast at the historic, high-end Hotel Saratoga appeared to have been caused by a gas leak.

“There was no bomb or attack,” he later told Reuters as he left the capital’s Calixto Garcia hospital, where many of the injured were being treated.

“It was just a really unfortunate accident,” he explained.

Despite this, the blast caused a brief panic in the historic old Havana neighborhood, which has gradually begun reopening to tourists after the pandemic devastated the Caribbean island’s vital travel sector.

As ambulances and rescue workers carried victims from the wreckage, many speculated about the cause of the blast.

How many people have been injured?

On Friday, a powerful explosion ripped through Havana, destroying a historic five-star hotel frequented by celebrities and diplomats and killing at least 22 people, including a pregnant woman and a child.

Some 50 adults and 14 kids were taken to hospitals after the blast, which Cuban state TV revealed was caused by a natural gas leak.

According to health officials, the explosion shook a nearby school with more than 300 students.

According to the health ministry, at least 14 children had been reported injured as of late last night, and one child had died.

According to initial reports, no foreigners were killed or injured in the blast, according to Cuba’s tourism minister, Juan Carlos Garcia.

The Saratoga had lost some of its luster as new hotels opened in Havana, but it was still a five-star establishment.

How did Hotel Saratoga explode?

The hotel, residing in a more than century-old building, had been closed and only employees were inside at the time of the explosion, state-run TV said.

The Saratoga, according to Roberto Enrique Calzadilla, a representative of the military-run company operating many of the country’s hotels, was set to reopen in the coming days.

He also stated that a gas leak appeared to be the source of the problem.

“The workers were … making repair work and doing all the work to open the hotel and in the morning they were refilling the gas and it seems some accident caused the explosion,” he said.

The explosion engulfed the building and its surroundings in plumes of black dust and smoke rising from the rubble.

Police and rescue workers moved quickly to cordon off some nearby government buildings, including the historic Capitolio, or capital building.A photo from the scene showed what appeared to be at least one body with a white cloth over it.

A block from the blast, a man carried a woman screaming in pain to a clinic, as onlookers begged for information about loved ones.

Police and rescue personnel moved quickly to secure nearby government buildings, including the historic Capitolio, or capital building.

The 96-room hotel, which has a spa, gym, two restaurants, two bars, and a rooftop pool, is one of Havana’s most well-known and popular retreats for government officials and celebrities.

Beyonce, Madonna, and Morocco’s King have all stayed at the venue, which is in a prime location in Old Havana, just across from the Congress building.

Construction work had been going on at the hotel, which was supposed to reopen in four days after the pandemic, according

Cuba’s communist government has prioritised healthcare and education spending in the face of a decades-long US trade embargo and an inefficient centrally planned economy.

Buildings exposed to salty sea air, high humidity, and hurricanes have not received the same level of funding.

I hope we’ve resolved all the doubts about How did Hotel Saratoga explode.

[…] How did Hotel Saratoga explode? What happened in Havana – Explained […]