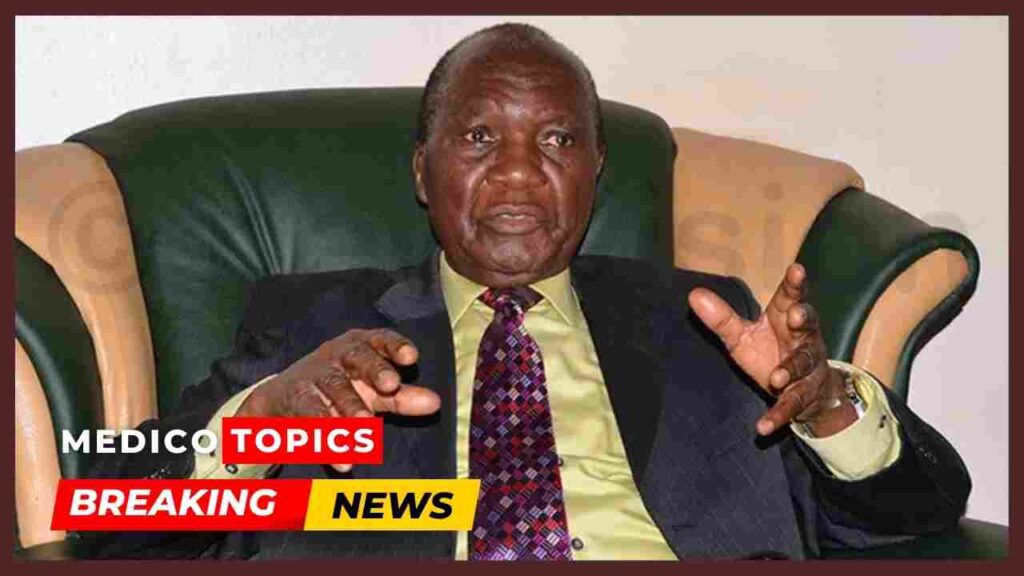 Ssemogerere, a former DP president and Uganda’s “most senior political activist,” passed away at 90. Check out what happened to him and Kawanga Ssemogerere cause of death

Paul Kawanga Ssemogerere, a former presidential contender and a legend of pro-democracy, has passed away.

According to his family, Ssemogerere, who had been ill for a while, passed away at his house in Kampala’s Rubaga Division at around 4 am on Friday. His age was 90.

John Baptist Kawanga, the younger brother of the former Democratic Party (DP) president-general, reported on Friday morning that Ssemogerere’s condition deteriorated on Thursday at about 10 p.m. before his doctor was summoned to check on him and left.

“However, he remained unsteady all through the night until early on Friday morning, when he returned from the shower and passed out on his bed.

Kawanga Ssemogerere cause of death

A few moments later, he was declared dead “At his brother’s house in Rubaga Division, a former member of parliament for Masaka Municipality, told media. His remains have been transported to Rubaga Hospital for an autopsy. A date has not yet been set for his burial at Nkumba, Busiro county.

“We all developed in his care because he was the head of our family. We have Ssesse island ancestry, but his burial will be in Nkumba, Busiro county, where we were all raised “John Baptist Kawanga was added.

Who was Dr Paul Kawanga Ssemogerere?

Until his retirement in 2005, Paul Kawanga Ssemogerere, who was born on February 11th, 1932, in what is now the Kalangala District of Uganda’s Buganda Region, served as the Democratic Party of Uganda’s head for 25 years.

Ssemogerere was born in Uganda on February 11th, 1932. He completed his high school education at St. Henry’s College Kitovu.

A diploma in education was awarded to him by Makerere University in Kampala.  In Meadville, Pennsylvania, he attended Allegheny College to pursue a degree in politics and government. At Syracuse University in Syracuse, New York, he earned a Doctor of Philosophy (Ph.D.) in public administration in 1979.  He passed away on November 18, 2022.

Ssemogerere was chosen to represent the North Mengo Constituency in the Uganda Legislative Council in 1961–1962, and afterward the National Assembly of Uganda.

He worked as Benedicto Kiwanuka’s Parliamentary Secretary before succeeding him as the Democratic Party’s leader in 1972.

Ssemogerere was exiled after the coup in 1971 and didn’t return until 1979 when he was appointed minister of labor.

Paul Ssemogerere became the Democratic Party’s leader in 1980. In 1984, Okeny Atwoma was defeated in his bid for reelection as a leader. Okeny Atwoma founded the Nationalist Liberal Party with former minister Anthony Ochaya, Cuthbert Joseph Obwangor, and Francis Bwenge in response to Atwoma’s unsuccessful challenge.

From 1981 until 1985, Ssemogerere served as the opposition’s legislative leader. In Tito Okello’s administration, he was appointed Minister of Internal Affairs (1985–86).

Ssemogerere served as minister of internal affairs (1986–88[3], foreign affairs (1988–94), and public service (1994–95) in Yoweri Museveni’s National Resistance Movement administration after the coup that made him president in January 1986. He also served as deputy prime minister during this time (from 1986).

He left his government positions in June 1995 to run for president as the primary opposition candidate, but he was defeated by Museveni in the subsequent election.

Ssemogerere served as the chairman of the OAU Council of Ministers from 1993 to 1994 and had previously served as a delegate to the Organization for African Unity (OAU).

John Ssebaana Kizito, the Kampala mayor at the time, succeeded him as party leader after he retired from politics in November 2005.

Erias Lukwago, the Lord Mayor of Kampala, expressed his shock at Ssemogerere’s passing and praised him for his tireless efforts to unite Uganda’s forces for change.

“We were devastated to learn of his passing early in the morning. On Monday of this week, while I was with him, we talked about a variety of topics with him, Dr. Lulume Bayiga, and other people. He devoted his life to bringing together the forces of change in this nation.

He was a powerful man who sought to bring people together. I was meant to meet with him today to follow up on the duties he had given us for our engagement. That he did not live to experience the moment he had fought so hard to achieve is incredibly sad.

He has been a great statesman and many of us’ godfathers. Our teacher has been him. He has always molded us, and I have been in his hands ever since I began my political career. Nearly every week, he and I talk about a variety of topics, including the future of this nation, Mr. Lukwago told reporters on Friday at Ssemogerere’s house.

“We have learned about the untimely death of Dr. Paul Kawanga Ssemogerere. We are alive to the fact that we stand on the shoulders of freedom fighters like him who came before us in resisting this dictatorship. We send our deepest condolences to his family for such a tragic loss”.

I have just learned of the passing of Dr. Paul Kawanga Ssemogerere! We have lost a great statesman. I had the privilege of drinking from the well of his wisdom. I admired his intellect and humility. Blessed are the peacemakers!

Anita Annet Among, Speaker of Parliament

I send heartfelt condolences to the family of the Hon Paul Kawanga Ssemogerere, the Democratic Party fraternity, and the Country at large upon the loss of a statesman and distinguished leader who dedicated his life to the service of Uganda.

How did Detective James Hamby die? Cause of death Explained