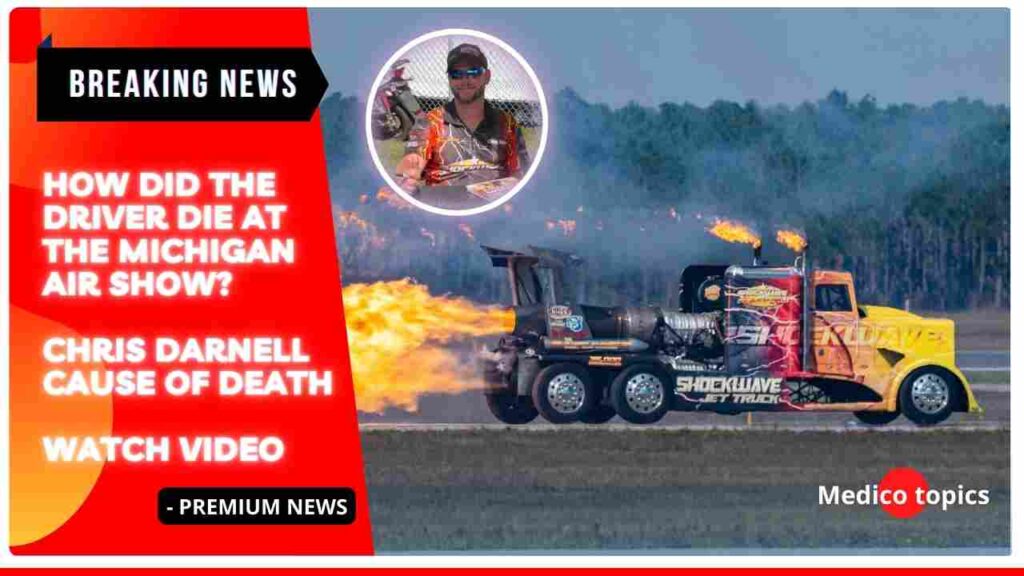 On Saturday, a jet-powered semi-truck was involved in a horrific accident in Michigan, killing Chris Darnell (the driver), according to authorities. Let’s see what happened, how did Chris Darnell die, and what was the cause of his death.

Chris Darnell, 40, was driving the Shockwave Jet Truck when it raced through or by an explosion and seemed to be in flames, generating a stream of smoke and debris seen on video. Battle Creek police identified the victim as Chris Darnell.

How did the driver die at the Michigan air show?

Uncertainty surrounded whether the initial explosion of flames, which produced a cloud of black smoke, was a component of the annual Battle Creek Field of Light Air Show and Balloon Festival expected to show. The event is advertised on the state’s website, which also mentions that it will involve “pyro and the WALL OF FIRE.”

The disaster occurred as the truck was speeding down a runway at the Battle Creek Executive Airport while two prop aircraft were performing aerial stunts and flying low above it.

Who is Chris Darnell? 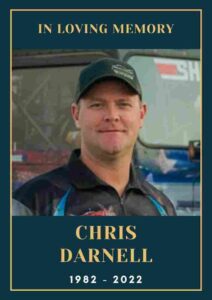 Chris is the SHOCKWAVE Jet Trucks and the FLASH FIRE Jet Truck’s driver/pilot. Chris has spent his entire life participating in racing. He also has a significant amount of expertise in the Motorsports Promotion industry. Over the years, Chris has participated in a wide range of racing events, including drag racing, circle track racing, and more. All of it has been done by him. Making any performance successful requires both performing and competing in racing as well as having experience in the production of motorsport events.

Chris is a graduate of Missouri State University with a degree in marketing, advertising, and promotions. Chris has a truck accessory business called 4 Wheel Customs in addition to operating the fastest trucks in the world in drag racing and air shows. Chris currently drives both the Flash Fire and SHOCKWAVE Jet Trucks in tandem with his father Neal.

Chris Darnell Cause of death

Neal Darnell, Darnell’s father, blamed the disaster on mechanical failure in a Facebook post on the Jet Truck page.

In the message, Darnell said, “We are really heartbroken. Chris’s 40th birthday was just a month ago. Everyone who knew him loved him so much. Chris totally loved the air show industry. As he put it, he was “Living the Dream.”

According to the International Council of Air Shows, the late Les Shockley, recognized as the founder of jet trucks, constructed the vehicle, which has been driven by the Darnells since 2012. According to the council, the vehicle is built on a Peterbilt from 1985 and is propelled by three J-34 jet engines.

Updates from the police side

According to reports, the semi-truck can go faster than 300 mph. Chris Darnell claimed to be the owner of the 375 mph jet truck speed record, which his team’s Flash Fire jet-modified pickup allegedly set in Florida in 2005.

Following the incident, which was reported just after 1 p.m. on Saturday, no more injuries were noted.

The remainder of the day’s air show had been canceled, according to police, but the rest of the festival’s events will go on as planned through Monday.

We were shocked to learn that a horrible accident occurred today at the Field of Flight Air Show in Battle Creek, Michigan, killing our good friend and fellow demo performer.

The SHOCKWAVE Jet Truck’s driver, Chris Darnell, has been a mainstay of the air show community for many years and has performed with us frequently.

He constantly motivated us and everyone around him with his enthusiasm for his art and love of motorsports.

The U.S. Air Force Thunderbirds are now thinking about Chris, his loved ones, friends, and his whole demonstration team.

The news that Chris Darnell passed away today while performing in his Shockwave jet-powered truck at the Field of Flight Air Show at Battle Creek Executive Airport in Battle Creek, Michigan, has saddened Summit Motorsports Park.

The event and Chris’s identity as the driver were both confirmed by the Battle Creek Police. Chris was highly-liked at Summit Motorsports Park as well as other tracks and airshows. He was also a son, brother, husband, and father. It was obvious that he was passionate about entertaining the crowd and interacting with them.

Chris was in his forties. Summit Motorsports Park sends it sincere condolences to Chris’ family and team.

What about the remaining events

Fireworks and musical acts are also part of the celebration. Continuing Saturday night events include one of the biggest fireworks shows in the state as well as live music. The five-day celebration continues until July 4 on Monday.

The remaining events now just cost $10 to attend. Tonight, balloons with this as their target will fly over the airport (weather permitting). There will be a performance by Great Lakes Timber Show. The stage will be rocked by the Sam Luna Band and the Megan Rae Band. Tonight at 10:30 PM, fireworks will be set off. The carnival is still open.

As we navigate these waters, we appreciate everyone’s patience. You hope to never be in a position like this, and when it does, there are a lot of moving parts. We are experiencing sluggish internet on the field today for updates. Our sincere apologies. Sometimes there are misunderstandings in communication, which leads to a greater problem.

We are horribly sorry. We’re sorry we had to cancel the air show portion today but it was done out of safety and respect. All events remain on schedule for tomorrow and Monday. We ask for everyone’s patience and understanding.

How did Susana Dosamantes die? What happened? Cause of death

How did Dermot O’Neill die? What happened? Cause of Death Explained

[…] How did the driver die at Michigan air show? Chris Darnell Cause of death Video […]