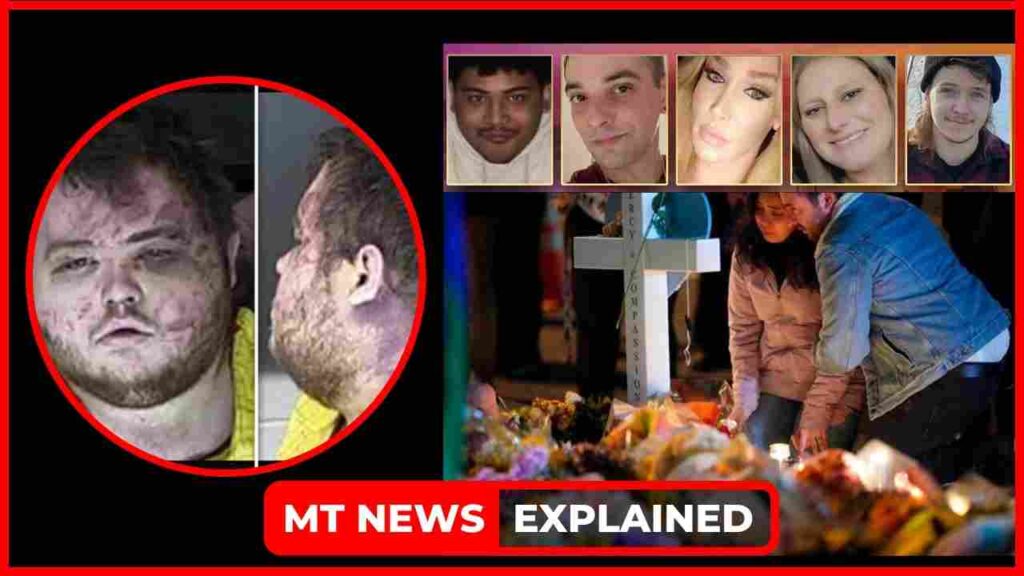 According to authorities, the 22-year-old who is accused of killing many people at an LGBTQ nightclub in Colorado’s second-largest city has been transferred from the hospital to the local jail. A judge decided during the suspect’s initial court hearing on Wednesday that they would continue to be detained without bond.

In the late-Saturday night shooting at Club Q in Colorado Springs, five individuals were killed and 17 more were injured. The act is being looked at by the police as a hate crime. 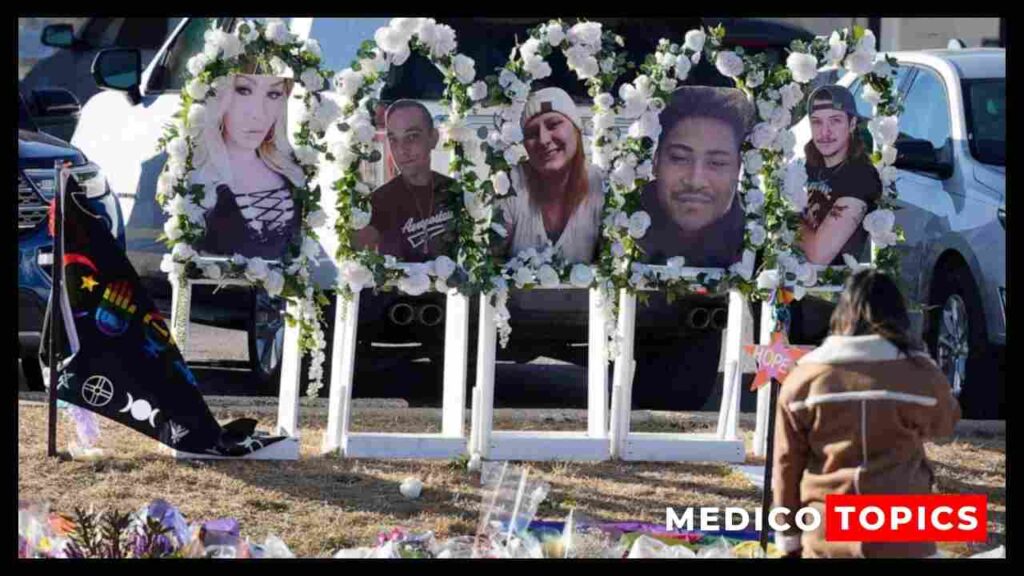 Portraits of the victims of a mass shooting at the Club Q nightclub are displayed at a memorial, on Nov. 22, 2022, in Colorado Springs, Colo.

What happened to suspect Anderson Aldrich?

You can clearly notice significant swelling and bruising in the recently released mugshot of Anderson Lee Aldrich by the police. As we previously reported, Army veteran Richard Fierro claims to have knocked Aldrich to the ground and repeatedly shot him in the head with his own gun until he appeared to be dead.

A trans woman, who was also present at Club Q at the time of the shooting, allegedly joined Richard in the beating of Aldrich and stomped him with her heels.

The 22-year-old defendant Anderson Lee Aldrich virtually appeared in court from jail for the Wednesday advisement session while slumped over in a wheelchair, handcuffed, and wearing a yellow sleeveless jumpsuit. There were visible bruising on their face.

Judge Charlotte Ankeny of the El Paso County Court declared that she had determined there is currently “legal power” to keep Aldrich without bond.

The next court hearing for the suspect was set for December 6 at 8:30 a.m. local time, though that timing may alter owing to a scheduling difficulty with the defense. 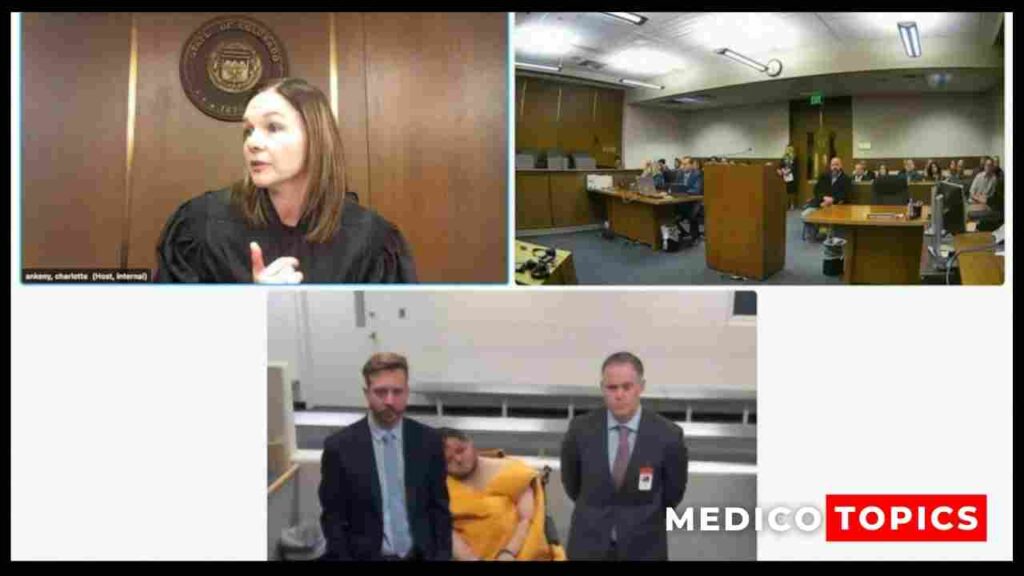 Aldrich is nonbinary, according to court documents from the Colorado state public defender that were made public on Tuesday.

According to online court documents, they are being held on 10 “arrest only” charges, including five counts of first-degree murder and five counts of committing a felony motivated by bigotry that resulted in bodily harm.

He has previously stated that there might be further charges in addition to those included in the arrest warrant. 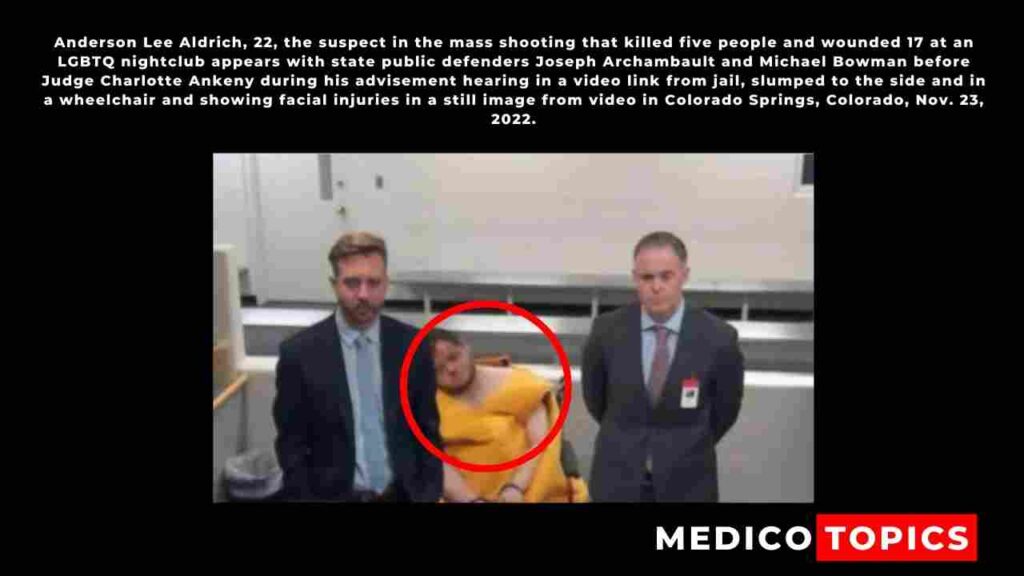 The arrest warrant and related supporting documents have been sealed by the El Paso County District Court. If the data were made public, “it could compromise the ongoing case investigation,” the prosecution argued in their motion.

The defense asked for an unsealed copy of the arrest warrant during the hearing on Wednesday so they could review it before the subsequent court date. With a protection order prohibiting further release, the judge granted the motion.

According to authorities, the shooter used a long rifle and sustained injuries during the shooting. Also, as per authorities, two “heroes” who have been named Thomas James and Richard Fierro engaged the shooter in combat. Just after midnight, police arrived on the site, seized Aldrich, and took them to a nearby hospital where they had been held in jail in the days that had followed the crime.

The suspect’s motive is still unknown

According to Colorado Springs Mayor John Suthers, the man was “very well armed” and “had tremendous ammo.” Suthers claimed that even if the reason is still unknown, “it has the makings of a hate crime.” Allen remained silent on a potential reason on Wednesday.

“I know those are things that people want to hear that about, but we have to be very careful about the things we say to safeguard this prosecution and to make sure that we have the best effort going ahead in this case and to deliver justice to the victims in this case,” he said.

When asked how potential bias accusations may be impacted by the suspect’s nonbinary status, Allen responded, “I’m looking at the evidence, evidence of what happened here. When deciding whether to file a document, that is what we consider.

Memorial in memory of victims

On Wednesday, hundreds gathered at Colorado Springs City Hall for a memorial in memory of the shooting victims. As a sign of “love, unity, and healing in the wake of the Club Q shootings,” the city displayed a 14′ by 25′ banner it had borrowed from the Sacred Cloth Project. After the fatal shooting at the Pulse nightclub in 2016, the flag was also flown in downtown Orlando, where it has since been flown on the anniversary of the attack.

“What does Colorado Springs’ future hold, particularly for the LGBTQ+ community? Here today, you have so much love and support “Nancy Henjum, a member of the city council who represents the area where the incident took place, addressed the assembled people. We must keep doing that throughout the ensuing days, weeks, years, and lifetimes.

In the wake of the shooting, more information on the suspect is shown below:

The suspect was a Grandson of a California lawmaker

According to social media posts and conversations with CNN, Aldrich is the grandson of retiring California Assemblyman Randy Voepel.

Voepel, a state lawmaker since 2016, was unsuccessful in winning re-election earlier this month. He was unavailable for remark. The extent of Voepel’s interactions with his grandson—the mother of Aldrich—is unknown.

Voepel gained notoriety as a legislator when he compared the attack on the US Capitol on January 6 to the Revolutionary War. The Lexington and Concord area. According to The San Diego Union-Tribune, he declared, “First guns fired against tyranny.” After Vice President Biden takes the oath of office on January 20, tyranny will ensue.

By tweeting a statement that included the words “I do not condone or encourage the violence and lawlessness that took place on Wednesday, January 6th, at our nation’s capitol,” Voepel later attempted to retract his remarks. It is abhorrent and unnecessary that lives were lost, government property was stolen, and law and order were flagrantly disregarded.

Questions have been raised over Colorado’s red flag law and whether it should have been applied to Aldrich or whether it would have stopped the shooting at Club Q in light of the suspect’s run-in with the law last year. 2019 saw the passage of Colorado’s red flag law, which was prompted by the state’s history of high-profile mass shootings over the previous 20 years.

Its purpose is to temporarily bar someone who is experiencing a crisis from getting access to weapons by a court order that is issued by the person’s family, a resident of their home, or a law enforcement official. It’s unclear if Aldrich bought any weapons before being apprehended in June 2021.

Colorado Attorney General Phil Weiser responded on Monday when asked if the red flag statute ought to have been applied in Aldrich’s case: “It’s too early to make any decisions.” Weiser remarked, “It’s still a new tool that we are learning how to use. “We are aware that every catastrophe offers us the chance to reflect and ask, ‘What did we miss?'” What can we improve upon going forward?

The suspect’s motive is still under investigation, check back for updates.