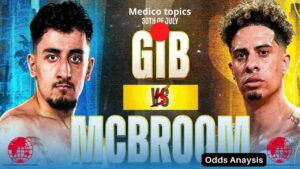 YouTube stars Austin McBroom and AnEsonGib are set to settle a year-long feud this summer in a boxing match in Los Angeles.

McBroom’s Social Gloves promotions make their return after a year of controversy outside the ring following their debut last year for a YouTube vs TikTok event. With a brutal stoppage of Bryce Hall, the ACE Family star headlined the inaugural Social Gloves fight night, and takes a big step up against ‘Gib.’

The Saudi-born British YouTuber also had a successful appearance on the show, dominating TikToker Tayler Holder in his redemption fight after losing to Jake Paul in the first round. Gib has been promoting a fight with McBroom all year and has now made it official.

Blueface, Austin’s brother Landon McBroom, and one of TikTok’s biggest creators Michael Le, who has over 51.4 million followers on the video-sharing app, is also expected to appear on the bill. According to our sources, their matchups will be announced shortly.

Gib, on the other hand, defeated Tayler Holder via unanimous decision. The fight initially ruled a draw before the Athletic Commission overturned the decision. The victory was the British fighter’s first since being knocked out by Jake Paul in January 2020.

Gib and McBroom announced the fight on their social media pages earlier Tuesday, making it official. The matchup has an interesting twist in that it will be a professional bout, which is in stark contrast to their previous appearances.

McBroom’s only boxing match was an amateur match against Bryce Hall. Meanwhile, Gib’s sole professional fight was against ‘The Problem Child.’ The two appear to be losing their headgear for their July pay-per-view appearance.

While no other fights for the July pay-per-view have been announced, Austin McBroom has revealed one name who will be on the card.

Following the announcement of his fight with AnEsonGib, McBroom spoke with TMZ Sports about the card. The YouTuber revealed an intriguing matchup for the July event. A former professional football player would appear in it.

YouTuber and boxer Austin McBroom is looking for redemption when he puts on his next boxing event at https://t.co/qHgwpU3Fcc Arena in July. https://t.co/p0k386ujTF

This will be Bell’s first time in the boxing ring. He is, however, no stranger to training. Following Jake Paul’s knockout of Tyron Woodley last year, he summoned ‘The Problem Child’ to the ring. The YouTuber-turned-boxer declined, but the former NFL player appears to still want to compete.

When will Social Gloves 2 be released?

On July 30, the Crypto.com Arena in Los Angeles will host the return of Social Gloves boxing. Given California’s stricter regulations, both McBroom and Gib have been granted professional licenses.

Their most recent bout took place in Miami, Florida, where the rules for sub-novice boxing are far more liberal in terms of headgear and rounds. It’s unclear what regulations will be applied to future contests.

When will Social Gloves 2 premiere in the UK?

Due to the enormity of the fight program, the event will most likely start at 11 p.m. in the United Kingdom, with the main event ring walks taking place much later.

There are likely to be six main card fights, plus one or two prelim fights, for a total of eight contests. The rules will be clarified at a later time.

Austin McBroom vs. AnEsonGib in the main event.

How did Jim Formanek die? What happened? Cause of Death Explained

How did Harrison Wagner die? What happened? Cause of death Explained