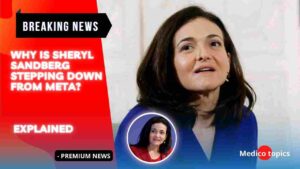 Sheryl Sandberg Stepping Down From Meta

After 14 years at Meta (previously Facebook), Sheryl Sandberg is leaving the firm. Sandberg was the company’s chief operating officer (COO) and was often regarded as Zuckerberg’s second-in-command. She was in charge of a lot of the modifications that happened on Facebook and its sister apps, such as Instagram, Messenger, and WhatsApp. She intends to devote more time to her foundation and philanthropic endeavors. By the fall of this year, Sandberg will have formally left the company. She will remain on the board of directors of Meta.

Sandberg has written a lengthy essay on her official Facebook page outlining her decision to resign.

In her essay, she describes how she met Mark Zuckerberg at a party and ended up spending the rest of the night talking to him. Sandberg also talks about how she only obtained a position at Facebook after several “dinners and conversations” with Mark Zuckerberg. Given that Facebook was still a startup at the time, she acknowledges the job was hectic.

“I’d set a meeting with an engineer for 9:00 a.m. just to discover that they wouldn’t show up.” They assumed I meant nine p.m., as no one would show up for work at nine a.m.

What happened to Sheryl Sandberg?

We had some advertisements, but they weren’t doing so well, and most sponsors I spoke with wanted to take over our homepage as The Incredible Hulk movie did on MySpace,” she wrote.
She also claimed that her late husband Dave advised her to “put up the correct process with him” rather than trying to fix every issue with Mark. “That we would sit next to each other, that he would meet with me one-on-one every week, and that in those meetings he would offer me honest feedback when he thought I messed up,” she requested of Mark Zuckerberg. Mark replied yes to all three, but only if the reaction was reciprocal.”

“He has honoured those commitments to this day. We still sit together (OK, not through COVID), meet one-on-one once a week, and get immediate and honest feedback,” she noted.

“I have never had to turn to Mark at the vital moments of my life, in the highest highs and the depths of true lows, since he was already there,” she wrote.

why she Stepping down from Meta?

She also wrote about how she had “a two-year-old son and a six-month-old daughter” when she joined Facebook, and she decided to leave the office by 5.30 p.m. so she could be with her children. However, with a young company like Facebook, this is not easy. “ I found my courage and walked out early anyhow, more out of necessity than bravery.

Then, with Mark’s help, I found my voice to openly disclose it and then discuss the issues women face in the workplace. “My objective was to make it a little simpler for others, to encourage more women to realise they can and should lead,” she wrote.
Sandberg also thanked everyone who has worked at Meta with her over the previous 14 years in her statement. “I expected to be in this position for five years when I started in 2008.” It’s time for me to start writing the next chapter of my life, fourteen years later. “I’m not sure what the future holds – I’ve learned that no one ever is,” she continued.

Mark Zuckerberg, the CEO and founder of Meta, responded to Sandberg’s tweet, calling it the end of an era. “You’ve architected our advertisements business, hired amazing people, built our management culture, and taught me how to run a company in the 14 years we’ve worked together,” he wrote, adding that he would miss working alongside her every day.

How did Bart Bryant die? What happened? Cause of Death Explained

How did Marion Barber die? What happened? Cause of death Revealed