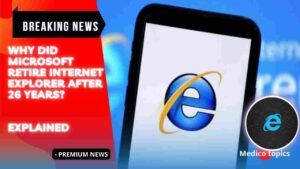 Why did Microsoft retire Internet Explore

On Wednesday, Microsoft ceased supporting the Internet Explorer web browser, signaling the end of an era for a 26-year-old brand marred by antitrust litigation, security problems, and sluggish performance. Instead, users will be directed to Microsoft’s newer Edge browser. why did Microsoft retire Internet Explore?

While Microsoft does not profit directly from browsers, Edge defaults to Microsoft’s Bing search engine, which produces advertising money for the software and hardware giant. With approximately $3 billion in revenue in the first quarter, this segment accounts for around 6% of Microsoft’s total revenue.

Is Internet Explore have issues?

Customers will not receive technical support or security upgrades from Microsoft since the company is focusing on Edge, a browser that works on mobile devices, Macs, and even Linux, rather than being limited to Windows. In 2015, Microsoft announced Edge as part of Windows 10 to compete with Internet Explorer as a new and efficient alternative to what Windows users were used to.

However, Internet Explorer retains a modest following, because it is currently the sole means to access certain corporate web applications. Even though it’s being retired, it won’t be going away anytime soon.

In a blog post, Sean Lyndersay, a general manager at the firm, wrote, “Opening Internet Explorer will gradually lead users to our new modern browser, Microsoft Edge with IE mode,” over the following few months.

“Users will still see the Internet Explorer icon on their computers (such as on the taskbar or in the Start menu), but if they click to open it, Microsoft Edge will open instead, with easy access to IE mode.”

According to Lyndersay, a “Reload in IE mode” button will appear in the Edge toolbar, and the browser will ask users if they want to access a page in IE mode next time.

“Every 30 days, Microsoft Edge will check in with the user to see if they still require IE mode for the site,” he added. “As more websites are upgraded to new standards, consumers will have less need to utilize IE mode and more need to use the modern rendering engine.”

The web immediately became a top goal for Microsoft in 1995. In a memo, Bill Gates, then-CEO of Microsoft, predicted that online advancements “will shape the trajectory of our industry for a long time to come.” Microsoft included Internet Explorer for free with the Windows 95 operating system. It quickly became entrenched.

Because of its inclusion in Windows, the world’s most commonly used PC operating system, Internet Explorer has a commanding lead in browser market share. Microsoft used this tactic to undercut Netscape Communications’ Navigator browser, which was still in its infancy at the time.

The bundling of Internet Explorer in Windows 95 was characterized as an “illegal tie-in” by the US Justice Department when it filed its historic antitrust case against Microsoft in 1998. The business altered the terms of its agreements with device makers to allow them to remove the browser’s icons from Windows in order to demonstrate competing browsers.

The performance of Internet Explorer was not always the best. When Chrome first debuted in 2008, it wowed critics with its quickness. That was on purpose. According to Aaron Boodman, a former Chrome engineering manager, when Google came up with the values for Chrome, it chose three S’s: speed, stability, and security.

Even now, the performance difference between Internet Explorer and Firefox is noticeable. It can’t keep up with Chrome, Edge, or Apple’s Safari when it comes to handling the widely used HTML5 markup language.

Over the last quarter-century, digital preferences have shifted. The smartphone has become a constant companion for billions of people, and Google’s Chrome browser won the browser wars in 2012.

Following the disclosure of one problem in 2014, the US Department of Homeland Security advised those who couldn’t follow Microsoft’s mitigation guidance to use another browser.

In 2020, Microsoft introduced a new version of Edge that relied on Chromium, the open-source project behind Google’s Chrome browser, and included Internet Explorer mode, which allowed enterprise workers to use Edge to visit websites created for Internet Explorer. Microsoft recommended users switch from Internet Explorer to Edge last year. The corporation is now actively reducing the visibility of its original browser.

According to data from privately held StatCounter, Microsoft now wants to ensure that those who are still using Internet Explorer migrate to Edge, which has a 4% market share. According to Lyndersay, the business will migrate favorites, passwords, and settings from Internet Explorer to Edge. “The best browser on Windows,” he declared.

How did Peter Scott-Morgan die? Cause of Death Explained

How will Netflix conduct the Squid Game reality show? A Overview