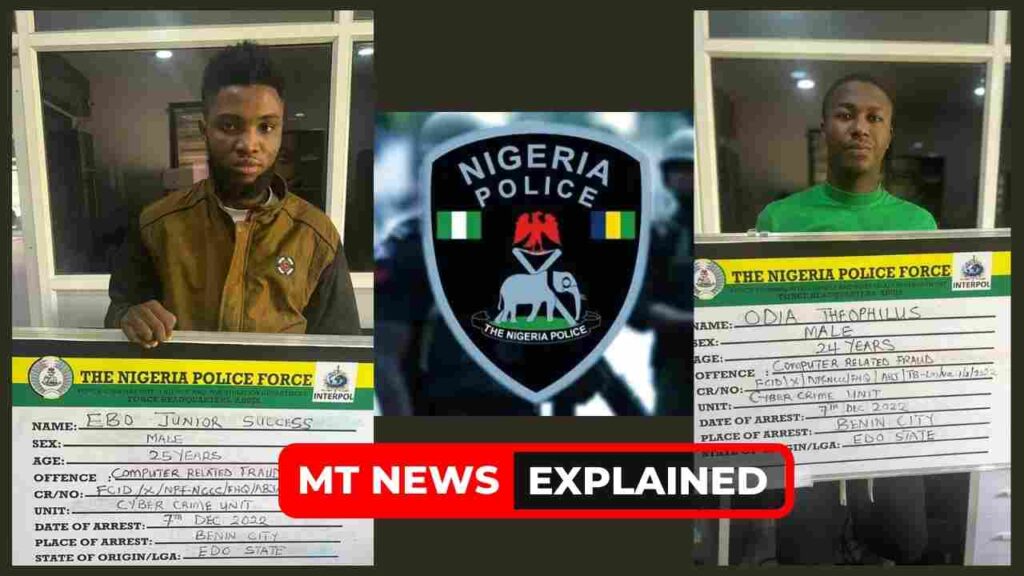 Police detain 2 Nigerians for stealing N91 million from a Korean. Learn more about Who are Odia Theophilus & Ebo Junior Success the Suspects arrested for computer-related fraud in detail.

CSP Olumuyiwa Adejoi, the Force Public Relations Officer (FPRO), made this announcement on Tuesday. The two, according to the authorities, formed a syndicate that specialized in cheating innocent overseas victims by adopting alluring aliases of other people and promising them love relationships, which they then use as a cover to defraud their victims.

According to a report on their activities provided by the Incheon Metropolitan Police Agency in Korea to the Interpol National Central Bureau, the suspects approached the victim, a Korean national named Baek Seong-hee, via Kakaotalk, a popular mobile messaging app in South Korea, under the pretense that they were US military personnel stationed in Yemen, in May 2021.

“Under the idea of a love relationship, the suspect stole from the victim 259,637,941 Korean Won (KRW), which is equal to nearly 91 million Nigerian Naira.

The NPF-NCCC arrested the pair of Odia Theophilus, 24, and Ebo Junior Success, 25, at their hideout in Benin City, Edo State, as a result of further investigations.

The statement said, in part, “The suspects admitted to being a member of a syndicate that committed these crimes and revealed their roles as accomplices who supply bank accounts for fraudsters to pursue their malicious activities.

The Head of NPF-NCCC, DCP Uche Ifeanyi Henry, was commended by the Inspector-General of Police, IGP Usman Alkali Baba, for his efforts in ensuring a crackdown on offenses linked to cybercrime. The IGP also praised the cooperation with various law enforcement organizations around the world that is possible thanks to the Interpol NCB platform, highlighting how crucial it is for combating transnational crimes. The statement continued, “Suspects will be charged to court upon completion of investigations.”

How did Ye Hak Young die? Model and actor’s cause of death Explained