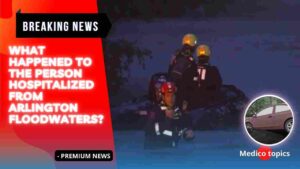 At least one person was taken to the hospital after being rescued from the floodwaters in Arlington. Let’s see what happened to the person hospitalized from Arlington floodwaters.

According to the National Weather Service, flooding is one of the major causes of weather-related deaths in the United States. Each year, flooding claimed the lives of almost 90 people. More than half of these deaths are caused by automobiles.

what happened to the person hospitalized from Arlington floodwaters

Arlington police said Friday night that fire and rescue workers were searching for motorists carried away in floodwaters in the 7000 block of Webb Ferrell Road. According to Matt Howerton, a reporter for Star-Telegram media partner WFAA-TV, at least one person was hospitalized in an unknown condition after being rescued from the floodwaters.

According to WFAA, the young man texted his location to his family, saying the car was filling up with water and he was stuck before it was swept away.

BREAKING: officials in #Arlington say person they were looking for off Webb Ferrell has been found and was transported to hospital.

Condition unknown. Young man. His car swept away by water.

His family says he gave them this location—saying he was stuck and car filling up. pic.twitter.com/UmN6aNMZBD

According to scanner audio, the fire department had employees stationed at numerous sites along streams to throw ropes out to victims if they were not picked up at the initial point of attempted rescue.

Calls concerning the flooding in the neighborhood of The Commons at Park Springs condominiums prompted fire and rescue crews and Arlington police to react. The electricity to the apartment complex was turned off by the fire brigade.

Arlington police responded to flood rescue calls frequently to close roads and prevent more individuals from driving into dangerous, flooded areas, according to a police spokesman.

HAPPENING NOW: #Arlington FD searching for someone off of Webb Ferrell and Hanrahan.

Calls for a rescue were made here.

As you can see water—is very high. (@wfaa) pic.twitter.com/21rYWWyZeL

Flash flooding was forecast in Tarrant County until around 9:15 p.m., according to the National Weather Service, which had issued a flash flood warning. Arlington Fire Department also requested Oncor crews to attend to electrical issues, including one around 9:30 p.m. when crews reported a tree on fire due to a power line.

Around 9:30 p.m., Arlington fire crews reported cars floating by in floodwaters over scanners, but the water levels had receded to the point where boats could no longer be used for rescue.

Firefighters and dispatchers requested Grand Prairie fire crews’ aid but eventually called them off, claiming in scanner audio that the situation was under control. Firefighters reported successful rescues in many cases. They’ve utilized ropes and vests to get flood victims to safety in several cases.

How did Ken Kelly die? What happened? Cause of Death Revealed

How did Geoff Hunter die? What happened? Cause of Death Explained