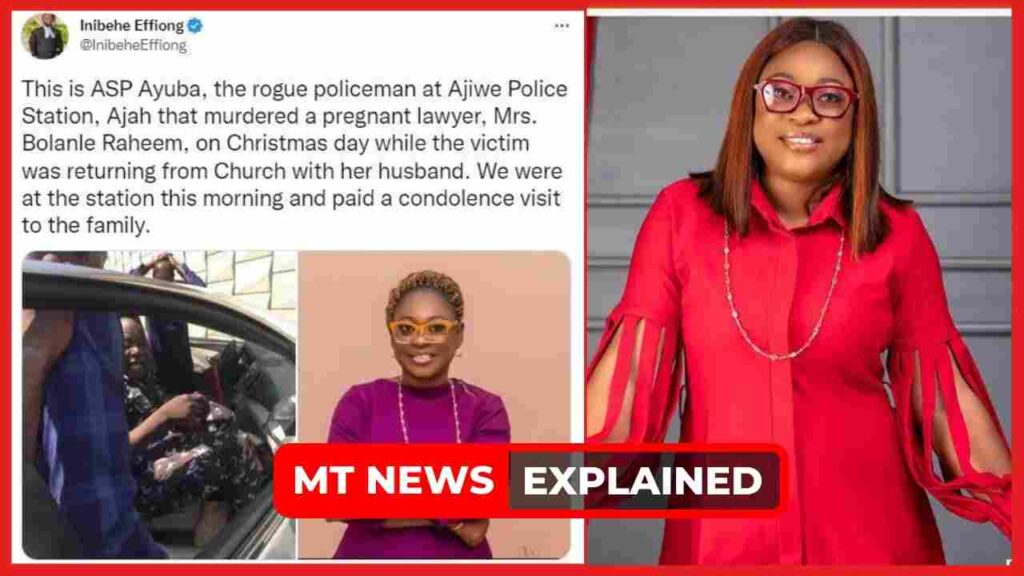 A Lagos lawyer, Bolanle Raheem was shot and killed by a policeman in Ajah. Let’s see what happened to the Lagos Lawyer in detail.

What happened to Bolanle Raheem?

Bolanle Raheem, a female Lagos-based attorney, was assassinated on Sunday. She was reportedly shot dead by an unidentified police officer working under the Lagos police command.

According to reports, some police officials from the Ajiwe police station in Ajah ordered the car to stop, and unexpectedly a gunshot from one of the officers is believed to have struck the lawyer when it was fired at the car.

The lawyer was returning from a church service on Christmas Day when a police officer opened fire on the car she and her husband were riding in.

Good evening @BenHundeyin, one of your officers attached to Ajiwe police Division Ajah, shot at point blank & murdered a lawyer colleague of mine today.
This is one too many of similar incidents with @PoliceNG officer in Ajiwe.

Now a family have lost a dear one on Christmas day.

After killing the victim, the policeman and other police officers left the scene. The event took place along the Lekki-Epe expressway’s Ajah under the bridge. The victim was taken to hospital as soon as the incident happened, but she was confirmed dead by the doctors.

Yvonne, a lawyer, described what happened in a post on social media, and the message reads,

“I am Barr. Yvonne, is a member of the NBA Lagos Branch. Sir, I tried reaching out to you, but I guess you are busy. My boss Barr Omobolanle Raheem was shot dead today by a POLICE OFFICER on her way back from Xmas service at Ajah under the bridge,” Ms. Yvonne said.

She continued, “Her family just called me now, that they need a lawyer to stand in for them before the police change the narrative. They have taken the matter to the Ajiwe Police Station. The police officer is from Ajiwe station. Her husband was the one driving, Barr. Omobolanle was seated in the front with her husband.”

According to Ms. Yvonee, the accused officer asked the pair to park, and “they required the vehicle in front of them to move so they could park well, and instantly the police officer shot at a close range right into her chest.”

She added, “On seeing what happened, the remaining police officers on duty there absconded. After a while, some policemen came and moved her body to the mortuary in Yaba without obtaining any consent from her family members.

Currently, her family has located where they moved her body to. I’m not in Lagos right now. I thought of bringing this to you for your assistance and guidance, ma. Thank you.”

The Nigerian Bar Association has stated that it will see that justice is given in the case of a lawyer, Bolanle Raheem, who was shot dead by a police officer on the Christmas Day.

Akorede Lawal, the NBA’s national publicity secretary, responded by calling the occurrence regrettable and noting that Yakubu Maikyau, the organization’s president, was keeping an eye on the situation.

We are aware of this unfortunate incident, he tweeted. This is yet another crime against a lawyer. Regrettably, our member is gone. The NBA President @YCMaikyauSAN is right on this and we shall ensure that justice is duly served.”

We are aware of this unfortunate incident. This is yet another crime against a lawyer. Regrettably, our member is gone. The NBA President @YCMaikyauSAN is right on this and we shall ensure that justice is duly served. https://t.co/bigvQaG0ND

The killing has been confirmed by the Lagos police command. A police officer assassinated an NBA member from Nigeria and was arrested.

The assistant superintendent of police (ASP) who fired at the deceased officer and two other officers are presently being held in jail, according to Benjamin Hundeyin, a spokesperson for the Lagos police command, who confirmed the incident.

The command’s spokesman, Benjamin Hundeyin, said that an accused cop was turned over to the State Criminal Inquiry Department, and an investigation has begun.

Unfortunate and avoidable incident that was. The ASP that shot and two others with him have since been taken into custody. They are to be moved to the SCID for further investigation. https://t.co/6Q0nYYEsMd

“Unfortunate and avoidable incident that was. The ASP that shot and two others with him have since been taken into custody. They are to be moved to the SCID for further investigation,” Mr. Hundeyin said.

A police officer affiliated with the same police station recently shot and killed a citizen named Gafaru Buraimoh on December 7.

A lawyer and member of the NBA, Mrs. Omobolanle Raheem has been killed by Nigerian Police officers on Christmas, on her way back from Church in Ajah, Lagos. She was shot in the car while her husband was beside her. #EndSARS

Bolanle Raheem, a lawyer in Lagos, was reportedly shot & killed yesterday by Nigerian Policeman on her way from #ChristmasDay2022 worship in Ajah, Lagos.

Dear Nigerians, Police are not your friend. Know this and know peace. Rest in Peace, sweetheart.

Lawyer Omobolanle Raheem was fatally shot dead by men of the Nigerian Police attached to Ajiwe Police Station, Ajah, Lagos. One death, too many. These evil and despicable men in uniform are getting emboldened by their reckless lawlessness. And lawyers are always targeted.

A lawyer, Mrs. Omobolanle Raheem, was killed on Christmas Day by men of the Nigerian Police, Ajah Division. She was murdered on her way from Church in Ajah, Lagos. Bolanle was shot point blank beside her husband. There is no justice in Nigeria, how can you have peace?