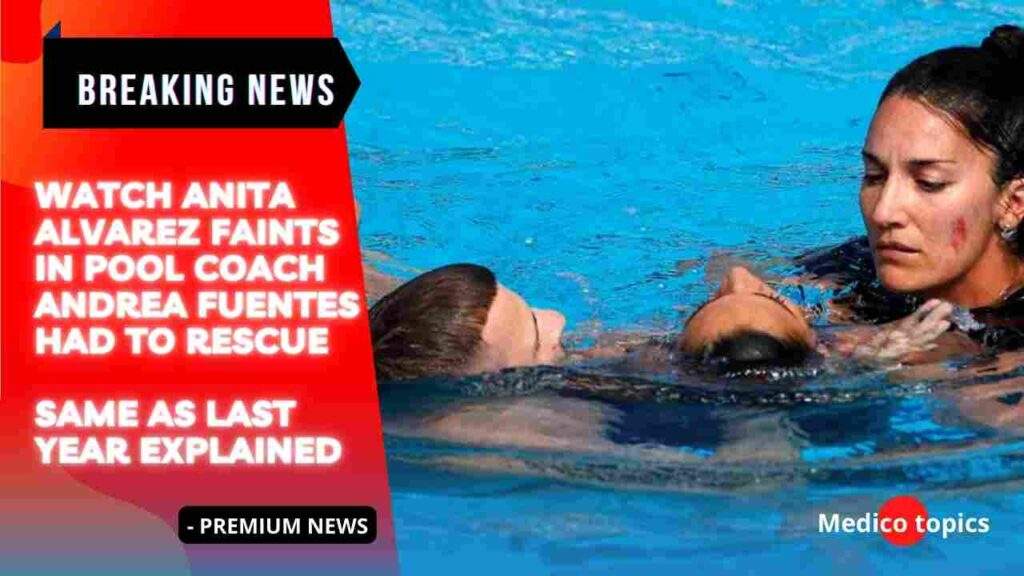 After finishing her routine at the World Aquatics Championships, swimmer Anita Alvarez fell unconscious in the water and needed to be rescued by coach Andrea Fuentes. Let’s see in detail about Anita Alvarez faints in the pool.

Following her creative performance in the solo free final, American competitor Alvarez, 25, instantly fell unconscious and sunk to the bottom of the pool. Before another male swimmer arrived to help, quick-thinking coach Andrea Fuentes jumped in to save her star.

Alvarez quickly recovered consciousness after Fuentes’ initial concern was to raise her face above the water before removing her from the pool. As their teammate underwent treatment, the American athletes were noticeably upset and moved to the pool’s edge.

We will update the actual video once it’s available.

Fuentes had already intervened on her charge’s behalf after a similar event. Additionally, she intervened when Alvarez passed out during her routine at an Olympic qualifying competition in Barcelona last year.

Anita Alvarez of the Town of Tonawanda is traveling to Tokyo, but more importantly, she is uninjured following a terrifying incident in the pool during the qualifying rounds in Barcelona last year.

Alvarez and her partner, Lindi Schroeder, were nearly through with the Olympic qualification performance when Alvarez reportedly lost consciousness, according to NBC Sports. Andrea Fuentes, head coach of the United States, jumped in fully attired to assist when she saw something was happening.

Anita was taken to the pool deck by Schroeder and her coach. Alvarez reportedly began moving her body before reaching the pool deck, according to NBC Sports. After five minutes of medical treatment, she recovered consciousness and was chair-wheeled away.

“We occasionally forget that this also occurs in other high-intensity sports, such as marathons, cycling, and cross-country running. Everybody has seen pictures of athletes who fail to cross the finish line being helped by others. Just in the pool, our sport is the same as others.”

Fuentes, a former synchronized swimmer who won four Olympic medals (three silver, one bronze) across two Olympic Games, continued by stating that Alvarez “feels wonderful today” and that she had been given the all-clear by medical professionals. She said, “Tomorrow she will rest all day and discuss with the doctor whether or not she can swim free team finals.

A lack of blood in the brain, an abrupt change in temperature, or a reduction in pressure are just a few of the factors that can lead to fainting.

Concerns about the Budapest lifeguards’ reaction times were also voiced by Fuentes. Following the event, Fuentes said the following to Spanish radio: “When Alvarez was unconscious in the water, it seemed like a whole hour had passed. I shouted at the lifeguards to enter the water and screamed that something wasn’t right, but they either didn’t hear me or didn’t understand.”

Video shows moments before Anita Alvarez faints in the pool:

How did Jaylon Ferguson die? Is it Overdose? Cause of death Explained