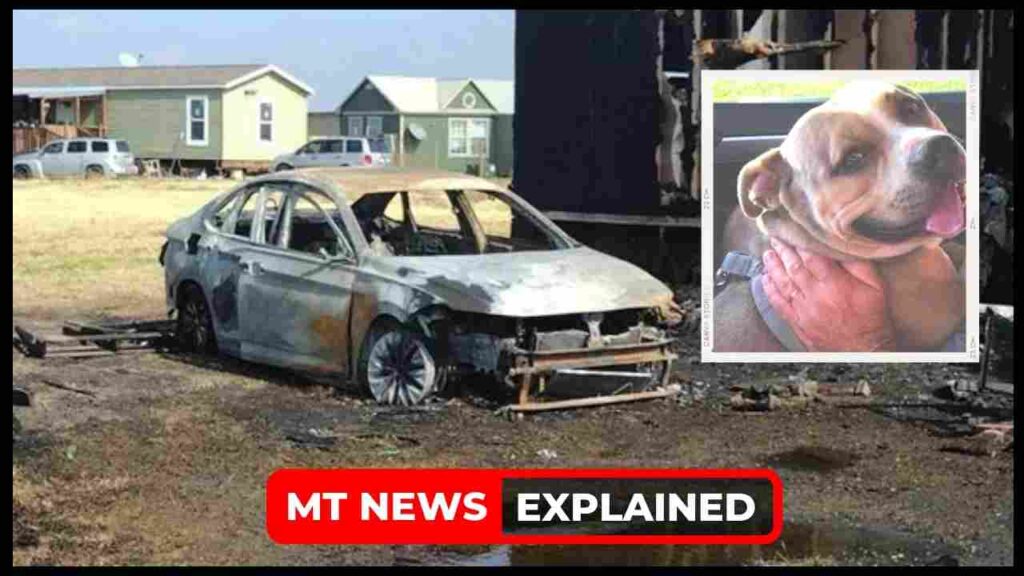 A brave pitbull that saved a girl from a house fire has died. Dog of Coastal Bend family protects daughter from a home fire. Let’s see How a Pitbull Ollie saves a 15-year-old Jaylee from a house fire before it passes away in detail.

On New Year’s Eve, a local family’s home caught fire, and they are praising God for saving them. Jennifer Oleniczak reported that she awoke to a disturbance and saw her house on fire.

Oleniczak stated, “We heard this incredibly loud banging on our wall and door. “So I gave him (my spouse) a shake and he woke up. To avoid hearing the fireworks, he had earplugs in.

He was shocked to discover that he had not even heard the door open. said Oleniczak. She claimed that after hearing her neighbor shout that her house was on fire, she immediately fled to the back door. Her deck and stairs were entirely on fire as she turned around and peered out the door. Yelling for her daughter and husband to get out. She then grabbed her Shih Tzo’s and six puppies.

“I started to run outside with them, but I tripped and stopped myself. My husband was already off the deck when I started throwing the puppies into the patio, so he started snatching them and throwing them off “said Oleniczak.

“There was a seven-foot flame and I saw my last two puppies catch fire and I shouted at my husband in a couple of minutes,” the woman recalls. Oh God, save me! I just shouted. And suddenly, the fire dropped, and I jumped “explained Oleniczak.

How does Pitbull Ollie save 15-year-old Jaylee?

The Oleniczaks’ 15-year-old daughter Jaylee began yelling, “Ollie, Ollie woke me up!” as her husband and neighbors helped the woman get up and into the street. When the fire first started, Jaylee was awakened by Ollie, the Oleniczaks’ pitbull, who assisted Jaylee in escaping in time.

She acknowledged that she had heard the door open. Ollie entered the space. Ollie, where are you? hence we were unable to locate him “Oleniczak added.

“He was my hero; he rescued the life of my daughter. He was the world’s most excellent dog “stated Oleniczak. The next day, the family looked in all the wrong places for Ollie. They examined the burned house, posted on social media and even at neighborhood shelters, but nothing was found until January 9.

“When my husband entered, he immediately noticed him on my daughter’s bedside. He collapsed at the foot of the bed after breathing in smoke. And I simply want to give him a big hug because Jaylee would have perished if he hadn’t gone in there, Oleniczak added.

The Oleniczaks were able to save four pets but lost seven. She claimed that no one is certain of the fire’s origin. A GoFundMe has been set up by the family.