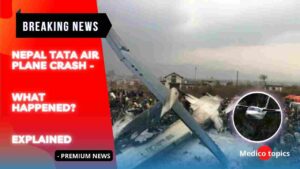 Tara Air’s twin otter aircraft was involved in an accident. Let us see what happened in Nepal Plane Crash.

What happened to Nepal Tata Airplane?

The twin otter aircraft flown by Tara Air that crashed has been found in the Mustang district’s Thasang area. According to Nepali media sources, the rescue squad has recovered the death of 14 persons from beneath the wreckage.

The Nepal Army, which has been coordinating and conducting the search operation, claimed it had discovered the missing person in the Thasang 2 area and that “with the weather improving, the search team will soon be heading there.”

Due to severe weather, rescue activities were halted on Sunday. The search included a Nepalese army helicopter and commercial helicopters, according to a statement from Nepal’s Civil Aviation Authority.

However, due to terrible weather and darkness, the search was put on hold until Monday morning, according to army spokesman Narayan Silwal. “The attempts are being hampered by poor visibility caused by inclement weather. “The plane has yet to be found,” he stated.

The 43-year-old aircraft took off from Pokhara at 9:55 a.m. (04:10 GMT) and transmitted its last signal at 10:07 a.m. (04:22 GMT) at an altitude of 12,825 feet, according to plane monitoring data from flightradar24.com.
The Tara Airplane was flying from Pokhara, a vacation town 200 kilometers east of Kathmandu, to Jomsom, a mountain town, on a 20-minute scheduled route. Close to landing in an area of deep river gorges and mountaintops, the turboprop Twin Otter aircraft lost touch with the airport tower.

The airliner had six foreign passengers, including four Indians and two Germans. Vaibhavi Bandekar, Ashok Kumar Tripathy, Dhanush Tripathy, and Ritika Tripathy are among the Indians on board.

According to Thane police, Ashok and Vaibhavi had split up but traveled to Nepal with their two children to visit the Muktidham temple, a Vaishnavite shrine approximately 18 kilometers from Jomsom airport, where the plane was scheduled to land.

The trip also had two Germans, 13 Nepalis, and three crew members, including the pilot, Prabhakar Ghimire, who is believed to be one of the country’s most senior instructors with “extensive experience in flying in high and hilly zones.”

What makes flying in Nepal so dangerous?

Nepal has a long and harrowing history of plane crashes. Over the last 30 years, there have been 27 deadly aviation crashes in Nepal, according to the Aviation Safety database. More than 20 of these have occurred in the recent decade.

Because of safety concerns, the European Union barred all Nepal-based airlines from flying in its airspace in 2013. The Kathmandu Post reported in March 2022 that the Nepal government’s reluctance to act had insured that the EU aviation blacklist will remain in place.

The deadliest plane crashes in Nepal have occurred at Kathmandu’s Tribhuvan International Airport, which is 1,338 meters above sea level. The terrain is particularly difficult because it is located in a tight oval-shaped valley surrounded by large, jagged mountains, limiting the amount of room for planes to manoeuvre.

The steeper and narrower landing strips higher in the Himalayas, according to most pilots, are much more challenging to navigate. Smaller planes with turboprop engines, such as the Twin Otter that crashed today, are permitted to land here, but not larger jetliners. Strong weather conditions in Nepal have a greater impact on these smaller planes.

February 2019: A helicopter operated by Air Dynasty crashed into a mountainside while attempting to return to Kathmandu in February 2019. Nepal’s Tourism Minister Rabindra Adhikari and entrepreneur Ang Chhiring Sherpa were among the seven passengers who died. In collaboration with Tibet Air, he owned Yeti Air, Tara Air, and Himalayan Airlines. The disaster occurred during a period of low visibility in the area.

Following that, the Nepalese government launched an investigation into the accident. According to the preliminary investigation, there were violations of operating procedures, such as weight imbalance caused by the fuel tank’s positioning and unsuitable passenger seating configurations.

According to the Kathmandu Post, the investigator suggested that the pilot was under ‘undue pressure’ to fly the VIP passengers in bad weather.

March 2018: A Bombardier Q400 operated by Bangladeshi airline US-Bangla crashed into Tribhuvan International Airport in Kathmandu in March 2018, killing 49 of the 71 passengers and staff on board.

The plane skidded off the runway, smashed through an airport fence, came to a stop in the middle of a football field, and then exploded. In Nepal’s history, this was the third deadliest aviation tragedy. The pilot allegedly failed not to obey the control tower’s orders and entered the runway in the wrong direction, according to airport officials.

Both the Kathmandu government and the airline blamed each other for the disaster, which sparked a lot of debate and discussion. According to reports, US-Bangla Air CEO Imran Asif “suspected” that the control tower “may have mislead the pilot.”

Abid Sultan, the plane’s captain and a former member of the Bangladesh Air Force, “seemed to suffer an emotional breakdown,” according to the final assessment released by Nepalese authorities in 2019. The crew’s inability to follow “the regular operating procedure at the critical point of the flight” was also criticized by the investigators.

September 2011: A Beechcraft 1900D operated by Buddha Air collided with a hill while transporting guests on a sightseeing trip over Mount Everest in September 2011. Ten Indians were among the 19 individuals on board that died. The disaster was caused by bad weather, as the Kathmandu airport and its surrounding area were engulfed in heavy monsoon clouds at the time of the collision.

September 1992: A Pakistan International Airlines Airbus A300 plane crashed during landing in Kathmandu, killing all 167 people on board. The plane took off from Karachi’s Jinnah International Airport and crashed into the last mountain crest, 11 kilometers from Kathmandu’s airport. The inquiry revealed that the approach to the airport is extremely challenging due to the surrounding topography and that the jet began to descend too soon due to the pilot’s error.

July 1992: Only two months before the Airbus A300 tragedy, a Thai Airways Airbus 310 collapsed on its approach to Kathmandu, killing all 99 passengers and 14 crew members on board. During severe monsoon weather, the plane slammed into a mountain 37 kilometers north of Kathmandu. According to the investigation, the plane’s flaps had a slight breakdown, and the pilot was under a lot of stress owing to a miscommunication with the air traffic controller during bad weather. Thai Airways allegedly failed to provide the pilot with proper simulator training for the challenging Kathmandu approach, according to Nepalese officials.

How did Tytyana Miller die? What happened? Cause of Death Revealed

How did Ronnie Hawkins die? Cause of death and the Illness Revealed