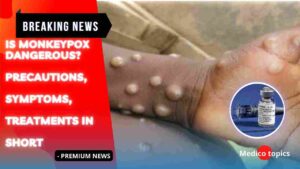 Monkeypox was discovered in 1958 after two outbreaks of a pox-like disease in colonies of monkeys kept for research, hence the name “monkeypox.” The first human case of monkeypox was discovered in the Democratic Republic of the Congo (DRC) in 1970, during a period of increased effort to eradicate smallpox. Monkeypox has been reported in humans in other Central and Western African countries since then.

People have contracted monkeypox outside of Africa as a result of foreign travel or imported animals, with cases reported in the United States, Israel, Singapore, and the United Kingdom. Monkeypox’s natural reservoir has yet to be discovered. African rodents and non-human primates (such as monkeys) may, nevertheless, carry the virus and infect humans.

When a person comes into touch with the monkeypox virus from an animal, a human, or contaminated objects, the virus is transmitted. The virus enters the body through broken skin, the respiratory tract, or mucous membranes (even if they are not apparent) (eyes, nose, or mouth).

Bite or scratch, bush meat preparation, direct contact with bodily fluids or lesion material, or indirect contact with lesion material, such as through contaminated bedding, are all possible methods of animal-to-human transmission. Large respiratory droplets are assumed to be the primary mode of human-to-human transmission. Because respiratory droplets can only reach a few feet, prolonged face-to-face contact is essential.

Monkeypox’s reservoir host (primary disease carrier) is unknown, while African rodents are thought to play a role in transmission. Only two times in nature has the virus that causes monkeypox been retrieved (isolated). The virus was first discovered in 1985 in the Equateur region of the Democratic Republic of Congo, in an unwell African rodent (rope squirrel). The virus was recovered from a deceased infant mangabey found in Cote d’Ivoire’s Tai National Park in the second study (2012).

Monkeypox symptoms in people are similar to but less severe than, smallpox symptoms. Fever, headache, muscle aches, and tiredness are among the symptoms of monkeypox. The fundamental distinction between smallpox and monkeypox symptoms is that monkeypox causes lymph node swelling (lymphadenopathy), but smallpox does not. Monkeypox has a 7-14 day incubation period (from infection to symptoms), although it can be as short as 521 days.

The disease starts with:

The patient develops a rash for 1 to 3 days (sometimes longer) following the onset of fever, which usually starts on the face and spreads to other regions of the body.

The disease lasts about 24 weeks on average. Monkeypox has been demonstrated to kill one out of every ten people who develop the disease in Africa.

A variety of precautions can be taken to avoid infection with the monkeypox virus:

Monkeypox virus infection currently has no documented, safe treatment. Smallpox vaccine, antivirals, and vaccinia immune globulin (VIG) can all be utilized to control a monkeypox outbreak in the United States.

More than 100 cases of confirmed or probable illnesses have been reported in over 20 countries where monkeypox is not endemic, primarily in Europe.

The outbreaks are concerning since monkeypox, which is spread by close contact and was initially discovered in monkeys, is usually found in west and central Africa and only rarely spreads elsewhere.

The Countries involved in Monkeypox

AUSTRALIA reported its first incidence on May 20 in a visitor who had recently returned from the United Kingdom. Another possible example was discovered.

ISRAEL confirmed its first case in the Middle East on May 21.

In Europe the monkeypox cases,

In America the Monkeypox Cases,

Will it create a Pandemic?

At this moment, the risk to the general population is low, according to a US public health expert speaking to the media on Friday. The virus that causes monkeypox can cause symptoms such as fever, pains, and a unique bumpy rash.

It is linked to smallpox but is usually milder, especially the West African strain of the virus found in a case in the United States, which has a fatality rate of around 1%. According to the authority, most people recover in two to four weeks.

The virus is not as easily spread as the SARS-CoV-2 virus, which caused the global COVID-19 epidemic.

The current monkeypox outbreak, according to experts, is spreading through close, personal skin-to-skin contact with someone who has an active rash. Once illnesses are recognized, experts believe it will be easier to contain the spread.

“COVID is highly infectious and spreads through the respiratory system. With the monkeypox, this does not appear to be the case “says Massachusetts General Hospital’s Dr. Martin Hirsch.

“What appears to be happening now is that it has entered the population as a sexual form, as a genital form, and is being distributed as are sexually transmitted infections,” WHO official David Heymann, an infectious disease specialist, told Reuters.

0
Reply
How did Jamie Bartlett die? What happened? Cause of Death Explained