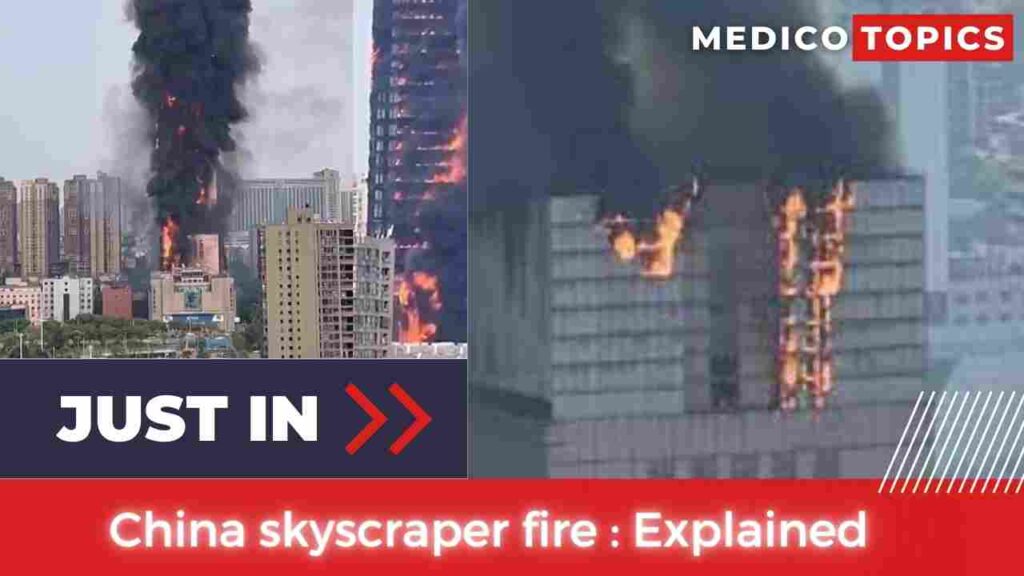 A 42-story skyscraper in Changsha, in the center of China, is completely in flames. Let’s see about the China skyscraper fire and What happened in the 42-story building in detail

Where is the 42-floor skyscraper located?

In Changsha, a city in central China, a skyscraper caught fire on Friday. According to the officials, no injuries have yet been reported.

China Telecom’s office is located in a 42-floor skyscraper that was the scene of the fire, according to state broadcaster CCTV.

According to CCTV, “thick smoke billowed from the location, as dozens of stories burned violently.”

The provincial fire service later wrote on social media that “at this time, the fire has been extinguished, and we have not yet discovered any victims.”

In the first image published by CCTV, orange flames could be seen ripping through the structure in a populated area of the city as black smoke rose into the air.

According to CCTV, a large fire engulfed a high-rise China Telecom office building in downtown Changsha, the provincial capital of Hunan, on Friday afternoon (Sep 16).

The fire has been put out, according to the latest report. pic.twitter.com/Ho5akzb5Rg

🔥A massive fire engulfed a high-rise China Telecom office building in downtown Changsha, capital of China's southern province of Hunan, on Friday (Sep 16) afternoon, CCTV reported.
The fire has been put out, according to the latest report. pic.twitter.com/Ho5akzb5Rg

A later photograph posted on social media claimed to show that the fire had died down as rescue workers blasted water jets over the building’s scorched front.

The fire at our No. 2 Communications Tower in Changsha was put out by 4:30 p.m. today, according to a statement posted on social media by China Telecom. Communications have not been disrupted, and no casualties have yet been found.

On social media, a video appeared to show hundreds of people running from the structure as burning rubble dropped from the top stories. The clip could not immediately be verified by AFP. The population of Changsha, the provincial capital of Hunan, is around 10 million.

According to CCTV, the 218-meter (715-foot) skyscraper was finished in 2000 and is situated next to a significant ring road.

In China, where inadequate enforcement of building rules and widespread illegal construction can make it impossible for people to escape burning structures, deadly fires are a typical occurrence.

What did state media sources report?

According to state media sources, a warehouse fire in the northeastern province of Jilin resulted in at least 15 fatalities and at least 25 injuries in July of last year.

A martial arts school in northern Henan province experienced a fire that killed 18 people—most of them children—the month prior, sparking a controversy about fire safety regulations.

Another two dozen people perished in two fires that broke out in Beijing’s migrant neighborhoods in 2017, while 58 people died in a massive fire that tore through a 28-story housing complex in Shanghai in 2010.

Everleigh Rose’s Dad cause of death: How did Tommy Smith die? Explained