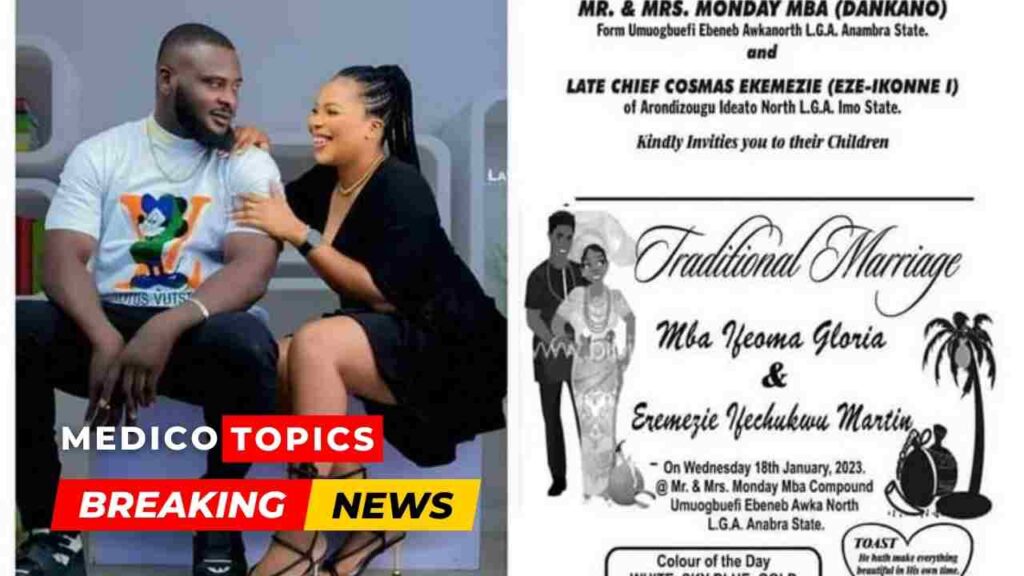 The brother of the groom drove Ifeoma Gloria Mba and Eremezie Tochukwu Martin around in a tricycle on Wednesday.

One week before their wedding in Imo, an intended couple was shot dead by unknown assailants.

Mba Ifeoma Gloria and Eremezie Tochukwu Martin, an engaged couple whose wedding was planned for January 18, 2023, have been killed in Arondizuogu in the state’s Ideato North Local Government Area by as-yet-unidentified gunmen.

The pair was allegedly targeted by the shooters while riding in the groom’s brother’s tricycle, according to the neighborhood’s residents. All of them were killed on January 11 in Arondizuogu shooting.

How did the couple die?

The pair Mba Ifeoma Gloria and Eremezie Tochukwu Martin was killed by the unknown suspect in Arondizuogu. The motive behind the shooting was not known yet.

In the meantime, several individuals who are familiar with the man claim that he dumped his ex-girlfriend, who looked after him while he was in school, in a very brutal manner; as a result, she may be responsible for the murders.

Investigations into the brutal murder of the intended couple have been started by the state police command.

Gunmen have reportedly killed a couple who were travelling home for their traditional wedding in Imo.
The couple, identified as Ezemezie Ifechukwu Martins & Mba Ifeoma Gloria, were said to have been killed on Tuesday night at Ndiejezie Izuogu in Ideato north LGA of the state.💔 pic.twitter.com/6bRoN7EcTF

Community members flocked to the streets in large numbers on Wednesday to condemn the perpetrators of the community’s ongoing killings and kidnappings.

They assert that the attackers have infiltrated their neighborhood and are known for robbing owners of flashy cars and killing them.

According to a resident who spoke to journalists about the incident, the problem of reckless kidnapping and vehicle burning has persisted in the neighborhood since last year.

A local resident said, “A young man who was coming home from his marriage was killed in his village yesterday night (Tuesday) with his fiancée and the brother who was conveying them in his Keke (tricycle). This occurred at Ndiejezie Izuogu in Imo State’s Ideato LGA.”

“We complained of this reckless kidnapping, killing, and burning of vehicles in Arondizuogu last year and the police spokesman assured me that something was already being done about it.”

“But since then, the killing and kidnapping have been happening every day. No Arondizuogu residents returned for Christmas and New Year. The few that came could not move around in their cars. As we speak, there was a mass exodus of people from Arondizuogu this morning (Wednesday) after the incident of last night.”

“The hoodlums specialize in stealing flashy cars and killing their owners if they refuse to release them. Other times, cars are burnt in the process. We are no longer safe in Arondizuogu. Students are afraid of going to school; our mothers no longer go to markets for fear of the unknown. Please help us before we are finished.”

How did Natasha Chansa Mwansa die? Lubuto Centre resident’s cause of death Explained

Who was Logan Holgate? A young Salford Red Devils rugby player dies suddenly, cause of death and Obituary